“Finally”  seems to be the most popular word among ice fishermen in northern Wisconsin.  With sloppy conditions and marginal ice on the lakes throughout our region, it’s been tough go of it for most ice fishermen and women until now.  Much of the heavy snow that was making things difficult melted and allowed our inland lakes to firm up.  Another blast of snow is on the way, but cold temperatures should continue to help.  New ice is also forming on Chequamegon Bay toward the Apostle Islands, and with any luck there will be new areas to access in the near future.  It’s all good right now, and here’s what Josh Teigen, Erik Thue, and Aron Kastern have to say about the fishing in our area over the past week. 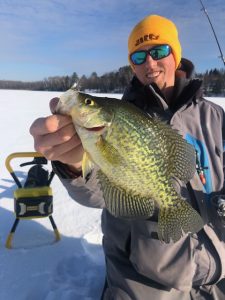 Josh Teigen from Josh Teigen’s Guide Service says what everyone has been waiting for, “There’s no more slush”.  That’s been the biggest pain to deal with over the last several weeks making any sort of movement or exploration extremely difficult.  Well that’s in the past, and he’s been putting his customers on a solid crappie bite focusing on basins in 25′ – 30′ of water.  He suggests using a tungsten jig with a waxie to connect with fish while utilizing your electronics to nail them down.  The good early ice walleye bite has come and gone, but Josh says they are still picking up a few decent fish in the evening using tip ups rigged with shiners or sucker minnows along deep weed edges or near rocky reefs and points. 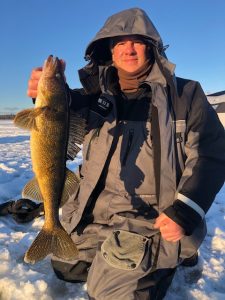 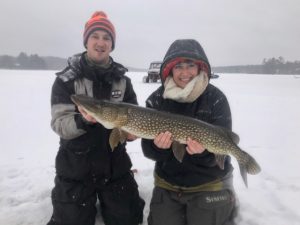 Erik Thue from Catch & Capture  reports that most of the big clear lakes in the Hayward Area now only have a few inches of snow on them making travel easy by foot, sled, or ATV.  The smaller lakes that were really bad have gotten better as well giving you lots of options to explore.  Even better than good ice conditions, Erik says fish are biting with the pan fish bite being the most consistent.  Stick to the deeper basins for crappies, but move shallower into the weedy bays for gills.  Pike action has been hot using a good spread of tip ups over weed beds and along weed edges.  Rig them with big suckers and big shiners to get those flags popping.  Walleyes have been inconsistent with the evening bite hit and miss from one day to the next with weather patterns definitely playing a role. 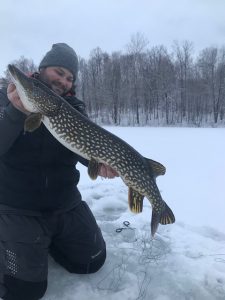 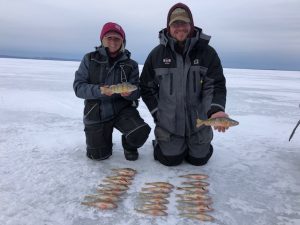 Aron Kastern and his gang from Unlimited Trophy Outfitters continue to get after it on Chequamegon Bay with some excellent mixed bag opportunities going on.  Ice thickness from Ashland east to the lighthouse and second landing ranges from 10″ – 12″, and water clarity has improved considerably.  Travel conditions are great for foot, sled, and ATV, but be careful of the large pressure crack running from just north of the lighthouse across toward Washburn.  Concentrate your efforts on the channel edges in front of Ashland for perch, pike, walleyes, and trout keying in on any points or turns that will concentrate fish.  If you’re not finding them on the channel edges, move onto the flats and pop holes until you dial in on fish.  People are starting to set up around the lighthouse for the good mid winter bite that usually occurs, and there’s also been a solid perch bite in front of second landing in the 8′ – 12′ weed beds with some jumbos hitting the ice.  Flashy and rattling jigging spoons tipped with minnows or waxies along with a spread of tip ups or set lines rigged with fatheads are the best way to cover it all.  Size up your minnows with golden shiners or suckers for a shot at bigger pike or walleyes.  The Washburn side of the bay is producing a good mix of trout, salmon, and a few whitefish with the edge of the ice sheet extending from Houghton Point to Long Island.  The whitefish action should get better as more ice is made and deeper water can be reached.  The bite on this side of the bay is pretty random right now with a few fish still shallow in less than 15′ and some along the deeper breaks.  Stay mobile until you get bit.  Anything north of Washburn should be accessed with caution, and make sure to check ice conditions as you go.  With any luck the ice will keep pushing toward the Apostle Islands, and the lake trout areas will be accessible soon.  Aron’s sleeper shacks will be set up on the bay this week.  Give us a call if your’re interested in spending a night on the ice and catching fish! 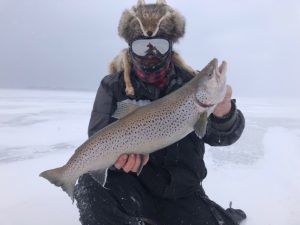 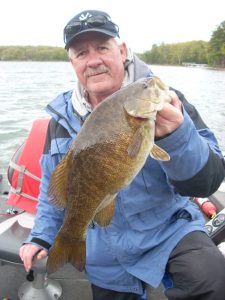 If you happen to be in the Hayward area on Saturday, stop by Angler’s Haven Resort to help celebrate our friend Terry Peterson and his amazing career as a fishing guide.  He’s been inducted into the Freshwater Fishing Hall of Fame class of 2020, and we couldn’t be more proud of everything he has accomplished in his 40 plus years as a professional on the water.  The party starts at 3 pm and will go until they kick us out.  What a well deserved honor for one of the best guys we know!

As always, huge thanks to Josh, Erik, and Aron for keeping us up to speed on what’s happening out there.  You guys are the best!  Check out the picture of this awesome South Dakota walleye caught by SDSU student Ross Olson sent to us by his proud uncle Jim Oyen.  That’s a hammer!  We love seeing those pictures, and please email them to us at [email protected] to be featured in our reports.  Our Badger basketball team is on a roll, and there’s kind of big football game happening this Sunday.  Like I said at the beginning of the report…  It’s all good!!! 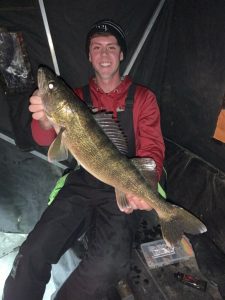