It’s been awhile…  Since we put the boat away in November, there hasn’t been a lot to report in the way of fishing activity until now.  Heavy snows and a December warm up made for bad ice conditions on most bodies of water, and the early ice gang had a tough go of it.  Slowly but surely Chequamegon Bay has been making ice, and our inland lakes are trying to settle down as well.  A successful deer hunt with my brother is in the books, and our hunting season in Wisconsin is over as well.  It’s time to drill some holes and tighten some lines again.  Erik Thue & Aron Kastern are back at it, and here’s what they had to report from the hard water. 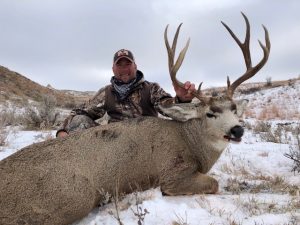 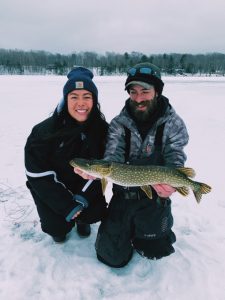 Erik Thue from Catch and Capture Guide Service has been plugging along on the Hayward area lakes with his customers despite less than ideal conditions, and he reports inconsistent ice, snow, and slush from lake to lake.  Most lakes have 6″ – 8″ of ice.  Some of the ice is cloudy and some slushy depending on the location.  He stresses that each lake froze differently and you should use extreme caution checking ice as you go.   The fishing however has been solid with panfish settling into mid winter locations.  Look for subtle contour points and turns in deeper basin lakes with more than 15′ of water.  Shallower basin lakes are producing crappies and gills on outside weed edges.  Tungsten jigs tipped with a spike or two have been the top presentation, but a really active school of fish will grab soft plastics as well.  For pike, set tip ups rigged with sucker minnows or shiners at different depths close to structure and along weed edges for some fun mid day action.  Walleyes are currently being found in deep sand grass along break lines.  Jigging spoons, minnow baits, and strategically placed tip ups with a small sucker or shiner is the best approach.  Make sure you’re set up to take advantage of low light periods in early morning and late evening.  Panfish, pike, and walleyes…  All of the bases covered.  Great report Erik, and keep them coming! 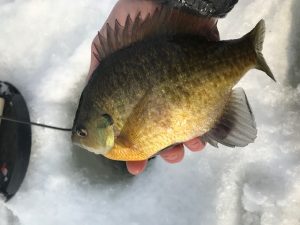 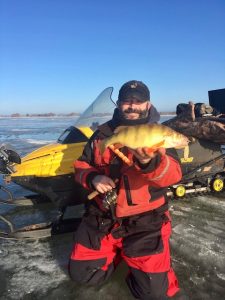 Aron Kastern from Unlimited Trophy Outfitters  always keeps us up to speed on Chequamegon Bay, and he’s been spending lots of time out there over the last week.  He says not many people have been fishing the Ashland side of the bay recently due to dirty water conditions, but there is a decent bite going on with perch, pike, and a few trout hanging around the first break and channel from the marina to the breakwall.  As you head east toward second landing, the water is a bit cleaner with a good perch bite happening along with some bonus whitefish, pike, and walleyes in and around around 8′ – 12′ weed beds.  Jigging small flashy spoons tipped with a minnow head or tail along with set lines and tip ups rigged with shiners or fatheads are a historically good approach for this mixed bag bite.  Ice depths vary from 6″ – 10″, and travel conditions by foot, ATV’s, and snowmobile are good.  Ice conditions on the Washburn side are a different story with 3″ – 7″ from Bono Creek to Washburn.  This side of the bay needs to be approached with extreme caution right now.  Aron suggests foot travel only and checking as you go.  Browns, splake, coho, and a few whitefish are all a possibility depending on the day with fish being caught along the first steep breaks or over flats at the bottom of a contour.  Depths can vary from day to day with fish sometimes shallower than 10′.  Aron does not advise any travel north of Washburn right now with extremely variable ice depths and open water by Houghton Point.  There’s plenty of action under good ice right now, and there’s no reason to be a pioneer over sketchy ice.  The bay is open for business, and Aron has it dialed in.  Good stuff buddy! 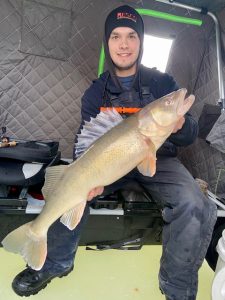 Kyle Sorensen has been doing a little prospecting of his own on Chequmamegon Bay this week.  Check out this amazing brown he put on the ice.  That’s an awesome fish Kyle! 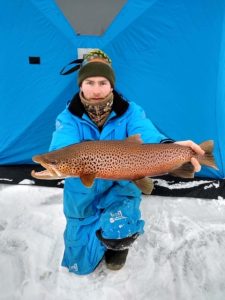 Believe it or not, 2020 is here!  Huge thanks to all of you who continue to follow and share our reports throughout the fishing seasons.  Stay tuned for more reports all winter long, and don’t forget to follow us on Facebook and Instagram.    We’d also like to see your fishing pictures from anywhere you may be fishing!  Please email them to [email protected] with a few details of the catch for an opportunity to be featured in our reports.  Here’s Sawyer Purdy from Baraboo, WI with a nice mess of gills he put on the ice with his grandpa Brent Jacobson.  That’s a good looking fish fry Sawyer!  Until our next report…  Get out there, and catch a bunch of fish! 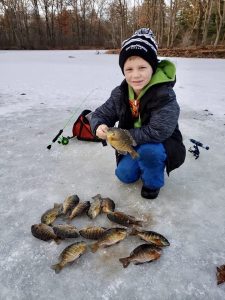