A nice stretch of warm and weather over the last couple of weeks has felt a lot more like summer around here, but it looks like more typical fall conditions are coming hard and fast.  Our fishing in September continued to be exceptional, and the big October bite is right around the corner.   Here’s the latest report from northern Wisconsin. 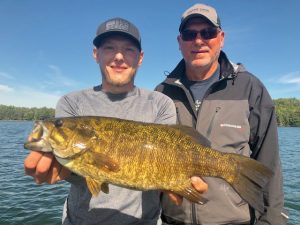 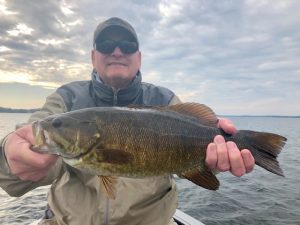 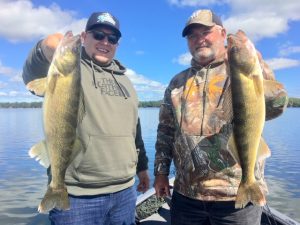 Water temperatures actually warmed up around the Hayward area during the month of September climbing back into the high 60’s and even low 70’s on some days.  Kind of strange to be wearing shorts and t-shirts at this time of year, but nobody was complaining…  The warming water extended what had already been a very good walleye bite trolling crawler harnesses over mud flats in 30 – 35′ of water.  1 1/2  and 2 oz. snap weights with planer boards pulled around 1 mph. allowed us to cover water efficiently and locate schools of fish that were randomly suspended around balls of bait.  Action was usually steady with good numbers and some big fish each day.  Chip and Chris Roska drew the short straw with weather conditions during their trip, but their effort was rewarded with a fat 28″ fish Chris put in the net while battling the wind and rain.  They earned that one!  The trolling bite fizzled out around the middle of the month, and walleyes are now schooling up around more traditional structure spots in 30′ – 40′ of water.  Once you find them, jigs and slip bobbers with minnows or crawlers are the way to go.  As the water continues to cool some fish will start moving shallow again, so don’t be afraid to check out weed edges and rocks in 15′ – 20′ if the deep water bite slows down. 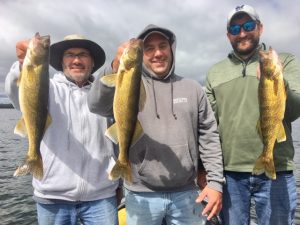 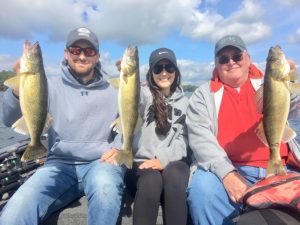 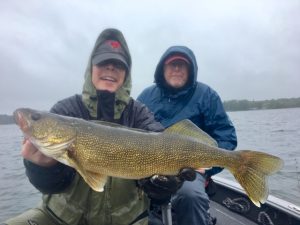 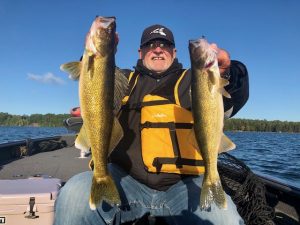 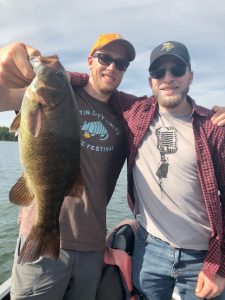 Smallmouth Bass have definitely been fattening up lately, and we’ve had some excellent days catching big fish and lots of fish.  Shallow rocky points, humps, and shorelines in 5′ – 15′ have them schooling up and chowing down on crayfish.  Two approaches have been working best for us.  On days with light winds, casting slow sinking plastics to shallow rocks has been the best.  When the wind blows, use it to your advantage.  Live bait rigs with minnows drifted down a wind blown shoreline are really hard to beat.  When you get into an active school, hang on.  They’re hungry, fat, and angry!  Nate Gove & Bill Roth had one heck of a day battling big fish after big fish.  These guys are always a blast to have in the boat, and it’s a good thing Nate was telling us how to catch them.  We couldn’t have done it without you buddy!  The shallow bite should hold up for a bit, but fish will eventually move back into the 15′ – 25′ range in the next couple of weeks. 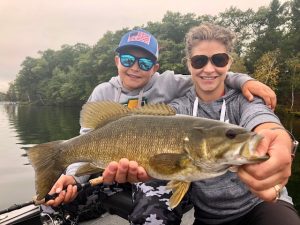 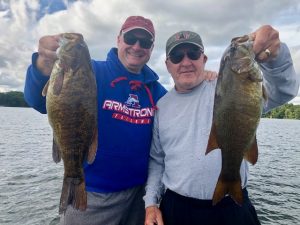 Crappies have made the fall migration to deep mud flats on some lakes and are in the process on others.  Look for fish on your electronics grouped up in anywhere from 20′ – 30′ of water.  Most of them will be near bottom or suspended slightly above, and as thermoclines disappear you might have to look a little deeper.  The best scenario is when your entire screen is covered up with fish where you can park on them and just keep catching.  That isn’t always the case however.  There are also days when fish are spread out in smaller groups, and you’ll have to keep moving after catching just a few.  Be willing to adjust, and you’ll stay on fish.  Slip bobbers with plastics are always a good way to go, but we’ve also been having a lot of fun bouncing Jigging Raps off the bottom.  You’ll be surprised at how hard they smack that thing, and it’s an incredibly effective approach to catch the most aggressive fish in a school.  Stan and Karen Miller spend a lot of time crappie fishing in their home state of Georgia, and it was cool to show them a few different techniques during their trip.  Once a crappie fisherman, always a crappie fisherman!  Remember that pulling crappies out of deep water can result in mortality to the fish if reeled in to quickly or not released properly.  Take your time, and take care of those fish. 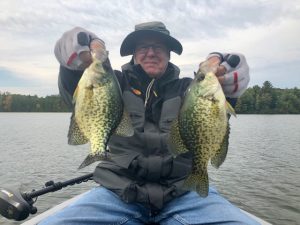 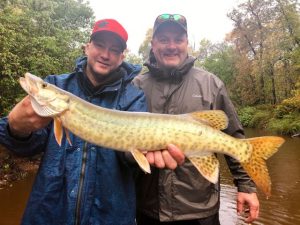 Even though we haven’t had a lot of opportunities to get after them lately, it’s definitely musky time.  Shorter days and cooling water temps always trigger a feeding frenzy that musky anglers look forward to all season.  Shallow structure areas are the spots to target right now.  Weed edges, shorelines, points, etc. are all areas you’ll want to cover casting bucktails, top waters, crank baits, and jerk baits.   Don’t forget to drag a live sucker on a quick set harness to get that follower that won’t commit to your lure.  I did have a chance to do a little river trip with Jon Schlussler and his buddy John Wenzel.  We started out hot when Jon S. put a sharp looking low 30’s fish in the net within the first hour of the trip.  Other than a couple of follows, that was the only fish we’d get our hands on that day.  That’s musky fishing…  You take them when you get them and appreciate every one! 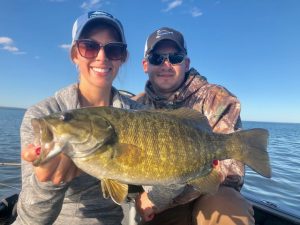 Smallmouth bass fishing on the bay has been a bit of rough sledding lately.  For one reason or another we’ve had a tough time getting out there, and the days we have didn’t produce a whole lot of fish.  Conditions are right with water temperatures in the high 50’s – 60’s, and it’s only a matter of time before fish begin schooling up and eating.  I have a feeling that when it happens it could be crazy good.  Dustin and Tasha Hetke returned for their annual trip, and we were able to spend a day on the big water looking for big fish.  These are a couple of bass junkies who know how to put fish in the boat.  They were far and few between, but we did find some really big ones that were north of 20″ and as fat as can be.  We covered a lot of water catching them along current areas and rocks in 15′ – 20′ as well as shorelines in 5′.  They’re really spread out right now, and you’ve got to run and gun.  If you’re going to have a slow day, this was the crew to have along.  They stuck with it, and ended up with some whoppers.  Tasha also caught her personal best pike that we stumbled into along the way.  You never know what you’ll catch out there!  If you’re after trout and salmon, the reports have been good.  Cohos, splake, and browns are moving into areas along shorelines and river mouths with fish being caught on shallow diving crank baits trolled behind planer boards.  Fish will be near the surface, and could be in anywhere from 10′ – 70′ of water.  Put the lines in and keep moving until you dial them in.  Look for diving birds, mud lines, etc. that can tip you off to concentrations of fish, and pay attention to details like speed and lure color when you get bites.  The bay is an amazing fishery, and this is the time of year that it all comes together. 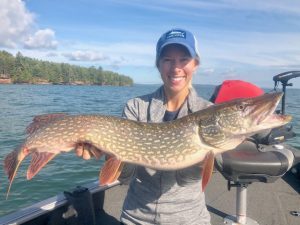 Autumn colors are popping, fish are hungry, and it’s one of the best times of year to be on the water.  It’s setting up to be a pretty good fall.  The Brew Crew is rolling, the Badgers are undefeated, and the Packers aren’t bad either.  Get out there, catch a bunch of fish, and ON WISCONSIN!