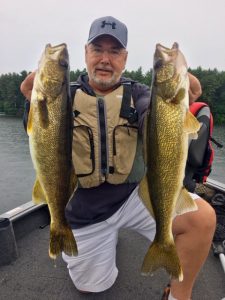 It’s been awhile since our last report, and we’ve got a lot of ground to cover from the past few weeks.  A cool June turned into a hot July in a hurry, and we experienced the heat wave that’s had a grip on the mid-west.  The warming water temperatures put fish on a feeding binge, and a very strong bite has continued throughout the month.  The fishing is good, swimming is good, and life is good.  Here’s what’s going on in northern Wisconsin. 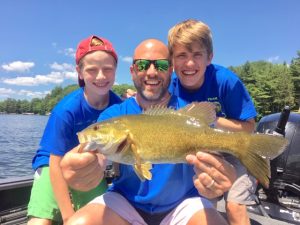 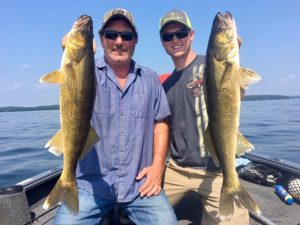 Good fishing early in the season has turned into very good fishing on the Hayward area lakes as water temperatures have climbed into the high 70’s.  This can sometimes result in a tough bite, but that hasn’t remotely been the case.  Walleye fishing has been outstanding, and we had an excellent weed edge bite for eater sized fish early in July.  When that began to slow, we transitioned to trolling crawler harnesses in deeper water off the weed edges and have been catching some outstanding fish.  Slowly pulling Bait Rigs spinners with crawlers around 1 mph. in 20′ – 25′ has produced lots of fish in the 25″ – 30′ class.  It’s not a big numbers bite, but it’s definitely a big fish bite.  You just need to cover ground and trust your electronics.  When you start seeing fish on your screen, keep grinding that location until you get bit using bottom bouncers to stagger depths of your harnesses depending on where fish are holding.  Larry and Ann Epperson fished with us out of Angler’s Haven for several days and put some amazing fish in the net with lots of fun stories to tell that included Larry pulling in a 28″ fish hand over hand after his line broke and Ann wrapping up the trip with a big pike that completely wore her out.  That was one tough fish!  Baitfish are starting to school up over deep basins, and open water trolling with crank baits should be the next transition we see.  Until then, crawlers it is! 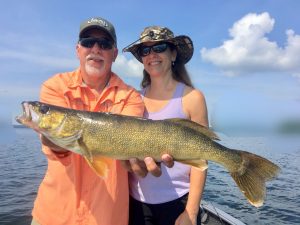 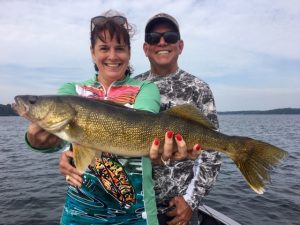 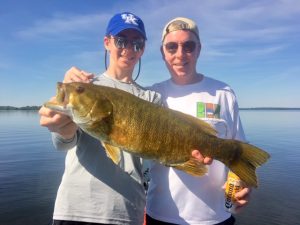 Don’t forget about smallmouth bass!  The smallie bite has really been nothing short of excellent this season.  A post spawn feeding binge produced a bunch of big numbers days with lots of big fish.  It seemed like anywhere there were shallow rocks in less than 10′, there was more fish to catch than we could handle.  Top waters, wacky rigs, ned rigs, and neko rigs were all effective on any given day.  On some days, it just didn’t matter what you threw.  That’s my kind of fishing…  One memorable morning with Joe and Will Lloyd produced over 40 fish coming from one small rock pile.  I never had to move the boat for 4 hrs.  It was was an absolute blast netting fish after fish for those guys.  A guide’s dream!  The bass all have big bellies right now with lots of bug hatches, crayfish, and small minnows to chomp on, and they’re starting to migrate toward deeper water.  Fish are showing up on rocky break lines, humps, and points in 12′ – 20′, and it can be a one here one there type of thing until you land on the jackpot like I did the other day with Bev and Otis Cobb.  We anchored up on a school of fish in 19′ of water that wouldn’t quit until Bev finally said that she’d had enough.  Now that’s a day of fish catching!  A variety of methods will catch fish over the next few weeks.  Slow rolling grubs, drop shotting plastics, heavy jigs, neko rigs, and slip bobbers with leeches, minnows, or nightcrawlers will all put fish in the boat.  Use your electronics to mark fish that will look like fat footballs, and don’t stop until you’re confident in what you see with typically 3 – 5 fish in a school right now.  When you pick off one or two, move on to the next bunch.  Keep moving, and keep catching! 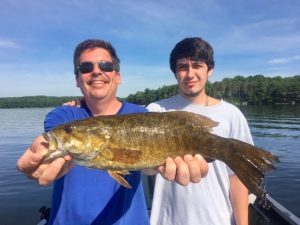 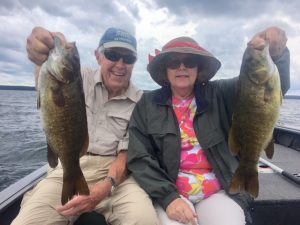 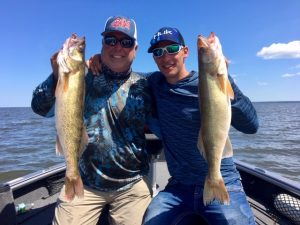 The walleye fishing in the harbor of the St. Louis River remained strong into July with good numbers and good fish caught on every trip.  Water temperatures remained a bit cooler due to some heavy rains and held in the low 70’s until recently.  Trolling crank baits behind boards at a pretty good clip has been the name of the game focusing on channel edges and flats in 5′ – 10′ and covering water at 2.5 mph until you found a school of biters .  When you found the biters, it was on!  Limits of eater sized fish under 20″ have been common along with plenty CPR’s in the 25″ – 28″ range.  Lake Superior walleyes are just different, and anybody who catches one says the same thing.  They’re thicker, meaner, and fight just a little bit harder…  Curt Tefft and Cory Mitrzyk got to experience exactly what I’m talking about.  They fished out of the River Rock Inn and had a ball when we pounded on a school of big girls on a hot and flat afternoon.  It was kind of a crazy scenario with the bite getting better as the sun got higher and hotter with absolutely no wind.  Not exactly the conditions I’m usually looking for, but what the heck?…  If they want to eat, we’ll definitely help ’em out.  Big schools of fish are now starting to spread out along the south shore of Lake Superior and will be holding in front of river mouths for the next several weeks.  When conditions are right with water temps in the high 60’s and low 70’s, it’s a really tough pattern to beat with the potential to catch some truly giant fish.  Trolling crank baits in 15′ – 35′ of water and looking for suspended schools is the right approach, but always watch the weather and wind forecast closely before heading out on the big water.  It can turn ugly in a hurry out there and not worth the risk if there’s any doubt.  Water color and clarity are also factors to pay attention to with fish tending to hold on mud lines or in slightly stained water.  If you hit it right, you can have the day of your life! 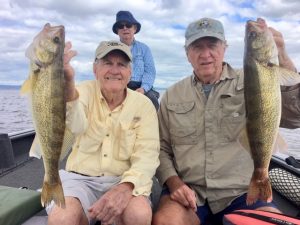 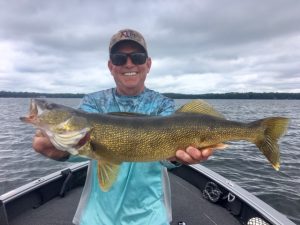 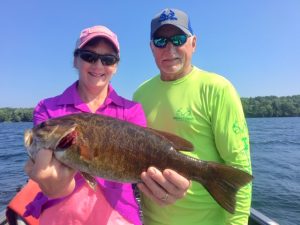 For no particular reason, we haven’t been on Chequamegon Bay much recently.  Too many fish and not enough time I guess…  Good problem to have!  There were still some smallmouth in shallow water during the last trip we had out there, but they were definitely starting to spread out and heading to off shore structures.  Current areas and rocks in 15′ – 20′ will be holding fish, and you’ll also be able to pick some up around wood along the Washburn and Ashland shorelines.  Presentations are wide open at this time of year with swim baits, crank baits, spinner baits, tubes, and live minnows all effective depending on the scenario.  There’s a lot of water to cover out there, and you have to be willing to run some days to stay on fish.  Some of our largest Chequamegon smallies over the years have come during the mid summer months.  Make sure the gas tank is full, and hit the throttle!  Walleye fishing on the bay is also starting to pick up a bit with fish being caught trolling crawler harnesses and crank baits over and through weed beds and weed flats in 12′ – 15′.  This can be another excellent option for big fish when conditions are right and definitely worth the time to explore.  In fact, I really need to get back on the bay! 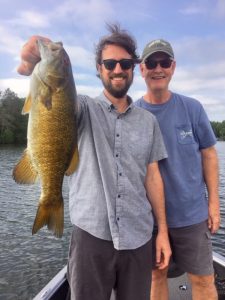 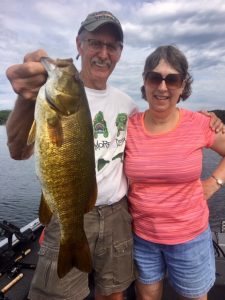 The Dog Days of summer have definitely arrived, but you won’t get any complaints from me.  Enjoy the heat, enjoy the sun, and catch a bunch of fish! 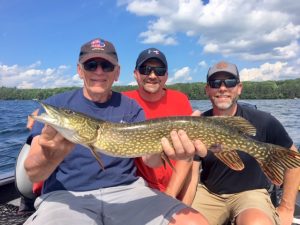