And just like that May is over…  The cold and wet weather pattern that hung over northern Wisconsin most of the month appears to be moving on.  Finally!  Even though we’ve had some tough weather conditions to deal with, cooler than normal water temperatures have extended a crazy good pre-spawn smallmouth  bite on the Hayward Area Lakes & Chequamegon Bay.  That’s occupied most of our attention over the last week, with a few crappie trips sprinkled in.  Rumor has it that a couple of bonus muskies may have even seen the net… 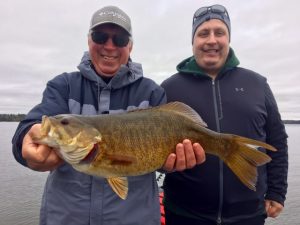 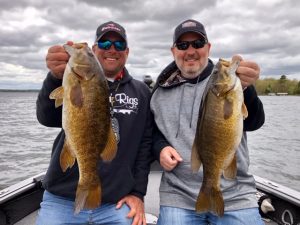 Water temperatures in the Hayward area were in the low to mid 50’s for most of the week holding up the smallmouth spawn but setting up some really good action on some really big fish.  Shallow rock/gravel flats and adjacent breaks are still holding fish, with presentations changing depending on the day.  We caught most of our fish in 3′ – 10′ of water using a variety of suspending jerkbaits, slow sinking plastics, rattling crankbaits, jigs, and grubs.  If they quit smacking one presentation, we just kept changing things up until we found what they wanted.  Windy days produced some of our best numbers stacking fish up on points and reefs.  When the weather began to settle down fish were more spread out, and you had to cover water to keep lines tight.  Jason Morrison and his son Jack from Farmington, MN had a memorable day when we stumbled onto a huge pod of insane fish during the afternoon of their trip.  They were stacked up on a rocky wind blown point, and we pounded on them for close to an hour of non stop action.  It was super cool with multiple doubles and some big fish up to 20″.  I even got in on the action catching a few while netting a bunch more.  Fun!  With water temperatures now nudging toward 60, nests are starting to appear, and I’d expect us to be in a full spawning pattern by this weekend.  If you’re a smallmouth nut, this is your time of year! 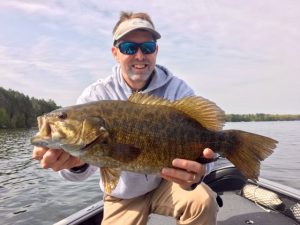 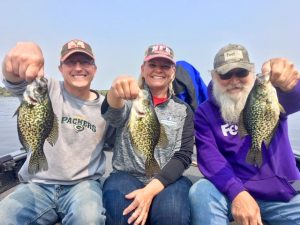 Crappies have been on and off , in and out, and everywhere in between.  All of the crazy weather has definitely had a lot to do with that, but it seems to be working itself out.  There’s still a lot of fish that haven’t spawned, and we’re finding them in 4′  – 8′ of water near spawning areas in the back of bays and along marshy shorelines.  Jigs and plastics under slip bobbers are all you need, and experiment with colors of plastics until you find the right combination.  Focus on new weed growth, and bounce around to find a hungry school.  I spent a great morning with Tal and Darlene Janowitz gathering up a fish fry during their annual spring trip, and they brought along Al Gaszak from Skwentna, AK.  We put enough good fish in the box up to 12″ for a fry, and got to hear some good stories from Al.  Keep those boat trashing bears up there my friend! 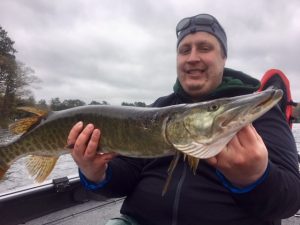 Musky season opened on May 25th, and a couple of them found their way into our boat.  OK…  We weren’t exactly targeting them, but who’s keeping track?  Nick Spaude landed a 35″ fish right at the end of his 2 day trip, and Jack Morrison helped net a 32″ ski that was stuck on the end of my line.  Both fish put up quite a battle on light tackle while we were bass fishing, and it was pretty cool to crack the musky code without counting up to 10,000 casts…  Hey, I’d rather be lucky than good any day! 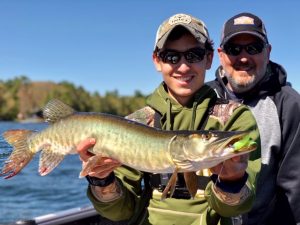 I haven’t been back to Chequamegon Bay since my last report but plan to be there for a few days next week if weather permits.  It sounds like the water is beginning to settle down, and the smallmouth bite is cranking up.  Water temperatures are pushing into the 60’s with the spawning fish and more piling in to shallow water.  Focus on 4′ – 6′ of water using slow sinking plastics like flukes and a variety of suspending crankbaits.  The cool spring we’ve had could set up one heck of a run out there over the next month, and I’m looking forward to getting back on the big lake.  The walleye fishing is also picking up steam, and I’m hoping we can devote some time to that as well.  Too many places to be and not enough time.  Good problems to have!

We haven’t had a chance to do much walleye fishing lately, but that should change by our next report.  If the weather man isn’t lying, fabulous weather and fantastic fishing is on the way in the coming week.  When water temperatures get into the 60’s this time of year it’s wide open for just about anything you want to catch.  Don’t let us down weather man!!!