We were hoping that all of the nasty weather was behind us in our last report.  As usual, Mother Nature always gets the last laugh.  In between rain, wind, and snow, we’ve had some excellent fishing in northern Wisconsin with opportunities anywhere you want to put a boat in the water.  The pattern has been pretty simple.  Good weather – Good Fishing.  Bad Weather – Well, you know the rest. 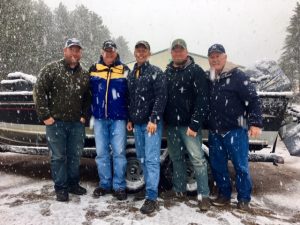 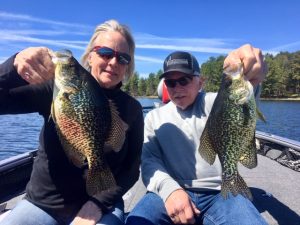 A few sunny days pushed water temperatures in some areas into the low 60’s, and the crappies got serious about spawning.  Lots of males started moving into less than 5′ of water with bigger females mixed in, and they were cooperative.  You could see fish scooting around shallow water when winds were calm, and it looked like things were coming together nicely.  That was until one heck of a nasty weather system showed up for the weekend bringing everything to a crashing halt and dropping temperatures back into the 50’s.  Males that had set up to spawn stayed shallow however, and they were the only option for getting into fish.  Most big females had vacated the shallows, but we were able to catch more than I expected with such a drastic weather change that resulted in more snow piling up on Sunday.  Enough with the snow!  We used small jigs and plastics to catch all of our fish, and small bays/coves with the warmest water produced the best in 2′ – 5′.  Hopefully some stable weather will bring those big girls back in, and the spawning process can continue.  Big thanks to the crew from Sister Bay, WI that stuck it out through some horrible weather.  I’m still warming up fellas!!! 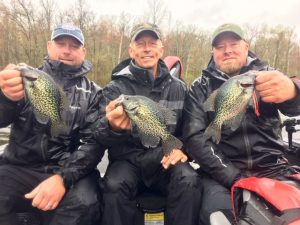 Smallmouth Bass continue to be in a pre-spawn pattern and are creeping into shallow gravel, sand, and rock flats in anticipation of the spawn.  It’s one of my favorite bites of the season with big numbers days along with big fish days all a possibility.  As a bonus post-spawn walleyes are mixed in with them, and you’re never quite sure what each bite will be.  A stiff wind blowing warm surface water into spawning flats can end up in some crazy good action.  Suspending stick baits, lipless crank-baits, and slow rolling Bait Rigs Grubmasters, has been putting fat smallies and hungry walleyes in the net.  Target 2′ – 8′ of water right now and fish fast util you get bit.  Once you get into a school park the boat, and have at it.  With water temperatures settling back into the low 50’s on most lakes, this bite could continue for a while.  No complaints from us!  Mark and Levi Hayman put an amazing day together for Levi’s annual birthday trip.  If you’ve been following our reports for awhile, you might notice that he’s taller than his father now.  Slow down Levi! 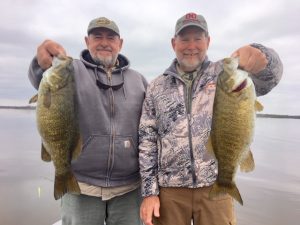 Stable weather last week help set up a good pre-spawn smallmouth bass bite that we were able to take advantage of.  The first good push is in with lots of round fish in 2′ – 5′ of water and staging to spawn.  Suspending stick baits and slow sinking plastics produced some good numbers along with some big fish up to 20″ for us.  The challenge right now is water clarity, and that seems to be changing from day to day.  Levels on Lake Superior are really high right now, and it’s resulted in a lot of muddy water that moves with the wind and run-off.  More rain certainly isn’t helping, and you’ll need to play it day by day out there until things settle down.  If it settles down…  Either way, there’s lots of fish in skinny water right now.  Keep moving, and keep poking around until you find them.  Channel edges, sand flats, and wood structure are all areas to target.  Randy Cherington and Dave Tubb put one heck of a day together on the bay, and started things out with a double on their first casts.  Now that’s how to start a trip…  There’s nothing like big Chequamegon Bay bronzebacks! 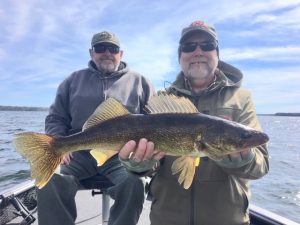 Even though the weather has been nuts, it’s not all bad.  The cooler water temperatures will keep fish shallow for a longer period of time, and that’s never a bad thing!  Bundle up, pack the rain gear and get after it.  Stay tuned, and we’ll keep you posted!