Maybe, just maybe, spring is on the way…  A couple of rainy days last week and a warming forecast are starting to put a good dent in all of the snow we have in northern Wisconsin.  Truthfully, it’s a sloppy mess right now on most of our lakes.  Once the slush settles though, we may still have some good late ice fishing conditions before the winter of 2019 is in the books.  What a winter it’s been!  With Lake Superior tributaries opening up for the steelhead run on the last Saturday in March, it’s hard not to get excited about the open water season that will be here before we know it.  Josh Teigen and Aron Kastern are still getting after it, and here’s what they had to say about the latest fishing conditions in our area. 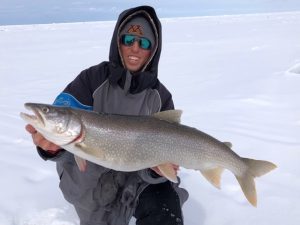 Despite lots of snow and really rough travel conditions, Josh Teigen says the inland lake bite has been fantastic for panfish.  He’s been concentrating on areas close to shallow bays in 15′ – 25′ of water and using small jigs tipped with waxies to catch some really nice crappies, perch, and gills.  The biggest obstacle right now is getting to the spots you want to target.  Snowmobiles are the only choice of vehicle right now, and you’ll want to stay on established trails if possible.  If the ice firms up, the late ice panfish bite could be an excellent way to get you fishing fix in over the next couple of weeks.  Josh has also been getting in on the big lake trout bite that’s been going in the Apostle Islands, but he says the warm up we’ve had has put an end to that.  He’s now targeting the mixed bag bite of trout, salmon, and whitefish that’s starting to fire up in Chequamegon Bay.  He recommends focusing on areas in 20′ – 45′ of water using Kastmaster spoons and Hyper Rattles along with a spread of tip-ups rigged with shiners.  Bright colors have been working best lately, so you’ll want to make sure you’re stocked up with with baits that will get the attention of cruising fish.  Travel conditions on the bay are also pretty tough with lots of slush.  It’s snowmobile only for the time being, but that should change once the snow melts down to the ice pack.  I bet you’re sick of slush Josh, and you’ve earned everyone of those fish lately.  Nice work! 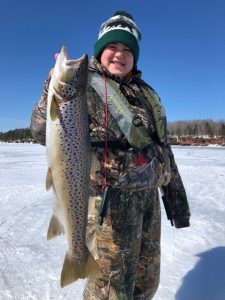 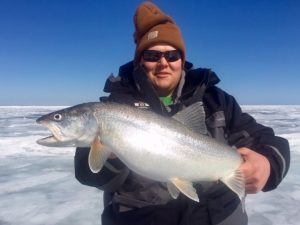 Aron Kastern has also been slogging through the slush and is wrapping up with the big laker bite in the islands as well.  He says it’s been one of the best years in some time for putting big numbers of really big fish on the ice with access to some spots that haven’t been ice fished in several years.  That being said, Aron is also anticipating the spring push of fish into Chequamegon Bay to happen any time soon, and those still drilling holes should expect mixed bag catches of perch, pike, trout, salmon, and whitefish.  If you hit it right, it can be some of the best fishing of the season.  Who wouldn’t want to get in on that?  As smelt start to make their run into the bay, everything else follows.  Weed beds on the Ashland side are likely spots to look for perch and pike with a few trout mixed in.  Breaklines, points, and river mouth areas along the Washburn shoreline will be good areas to search for whitefish, salmon, and trout in 20′ – 50′.  Ice conditions will be the wild card for accessibility, so don’t take any unnecessary risks and check ice conditions as you go.  There’s still a lot of ice in the bay, but it can deteriorate rapidly as we move into April.  I’m starting to feel like a perch fry.  Save a few for me Aron! 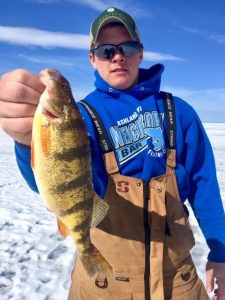 For those of you willing to stick it out, some of the best ice fishing we have to offer is definitely around the corner.  It’s a short window to take advantage of, but definitely worth it.  Make sure you get your March Madness brackets turned in, and get back on the ice for one last hurrah.  Go Badgers!