Snow is piling up, ice is getting thicker, and we’re settling into a good “Old Fashioned” Wisconsin winter.  As February sets in, there’s no lack of ice fishing opportunities right now.  From the Apostle Islands, to the St. Louis River, to the Hayward area lakes, there aren’t many places you can’t drill a hole.  You can pick your poison and have a good chance of getting on some fish just about anywhere you want.  Travel conditions will be changing however with snow accumulations over a foot reported some places in our region from the recent storm.  Aron Kastern, Tony Brown, and Josh Teigen have been getting after it on all fronts, and here’s what they have to say about the current conditions. 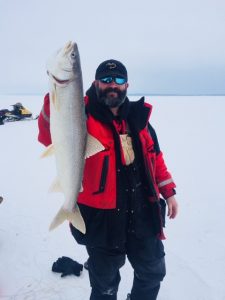 Aron Kastern reports that Chequamegon Bay has had great ice and travel conditions from Ashland to the lighthouse to 2nd landing over the last week.  The mixed bag bite in that area continues to produce with big perch, browns, coho, pike, walleye, etc., all possible.  Weed beds and weed lines are key targets right now in anywhere from 8′ – 15′ of water.  Obvious break lines and points in 15′ – 25′ will also produce roaming schools of fish.  Aron suggests targeting one species, but be ready for whatever bonus fish come through.  It’s time to run and gun.  If you’re not marking, start moving.  Basic presentations like small spoons tipped with waxies, plastics, or minnow parts are a good way to cover your bases along with set lines and tip ups rigged with shiners.  Start small with your presentations and size up for more aggressive fish on active days.  The burbot night bite is also starting to pick up, and Aron’s sleeper shacks are a perfect option if you’re looking to get after those strange looking dudes.  Despite their looks, they fight like a son of a gun and taste pretty darn good as well.  As for the rest of the bay, Houghton Point to Long Island and the Bayfield area has had the most change in conditions since our last report.  Aron has seen ice thickness from 8″ – 12″ with an excellent lake trout and whitefish bite over water around 100′ or deeper.  There’s a few slush pockets north of Bayfield and Red Cliff heading toward the islands, and Aron suggests snowmobile travel only.  With more ice pushing deeper into the islands, we should see some pretty fantastic lakers pulled through the ice over the next month.  Even though ice conditions are good, those not familiar with the Apostle Islands area should always look into hiring a guide.  With constantly changing currents and ice conditions, it’s no place to mess around.  Aron warns that all of the snow we’re currently receiving will most likely create more slush pockets  throughout the bay and islands to be aware of.  One thing’s for sure, he’s got things dialed in.  Keep it coming buddy! 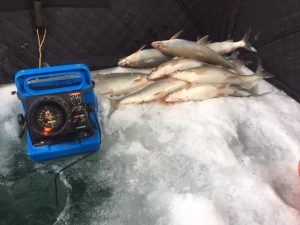 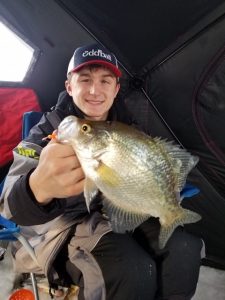 We haven’t had the opportunity to report on the St. Louis River for quite awhile, but that’s been solved.  Tony Brown from Bait Rigs Tackle Company decided to do a little exploring to see if he could nail down the mid winter crappie bite.  By all accounts, the mission was a success as he, his father Pete, and son Carter located some super sized slabs that the river has been known to produce over the years.   The Brown men found fish after popping holes in 14′ – 16′ using Panfish Cobra jigs tipped with plastics.  These are some serious crappies the the guys were after with fish up to 14″ hitting the ice.  Tony reported well over 2′ of ice in the area he was fishing with smooth ATV travel, but that’s probably changing rapidly with snow accumulations adding up.  You’ll probably find snowmobile only conditions unless you find a plowed road.  Don’t overlook the St. Louis River if you’re serious about big crappies.  Those are magnums Tony and Carter.  Thanks for checking in fellas! 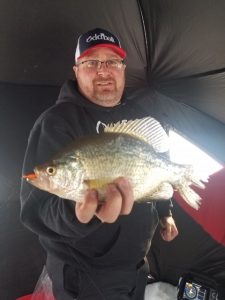 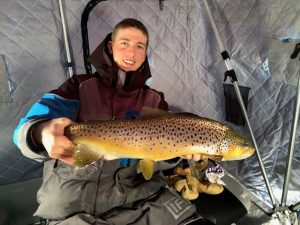 Josh Teigen checked in with us, and as usual he’s been spread all over our area from the big water to the inland lakes.  Josh also reports a strong bite on Chequamegon Bay and around the Apostle Islands with lots of ice and pretty easy travel before this snow storm hit.  He is seeing anywhere from 4″ – 14″ of ice from Houghton Point to the north and still recommends checking as you go, especially around the islands.  He’s also seeing a few slush pockets as well, and you’ll need to keep your eyes peeled to avoid these bad spots.  His crews have been catching a mix of browns, splake, coho, and whitefish targeting them in 15′ – 35′ of water along shoreline breaks.  Jigging Kastmasters and Hyper Rattles along with tip-ups rigged with shiners have been the productive presentations.  Lake Superior hasn’t been the only hot bite for Josh.  He says the inland bite has been great as well with good numbers of active panfish suspended in deep basin areas from 20 – 30′ depending on the body of water.  Small Kastmasters and tungsten jigs tipped with plastics and waxies are connecting with crappies and gills.  Tip-ups rigged with suckers and shiners in the same areas are also putting some bonus walleyes and pike on the ice.  Plenty of ice and smooth travel has been the rule on inland lakes, but expect to see slush pockets along with snowmobile only travel in the coming weeks.  Putting on miles and catching great looking fish.  Heck of a game plan Josh! 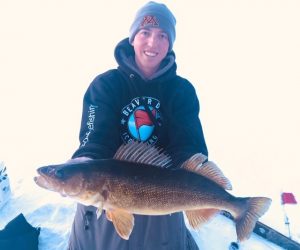 Sounds to me like it’s time to get on the ice!  Keep in mind that variable snow accumulations across our area could change up conditions significantly, and you’ll want to be prepared with the appropriate equipment wherever you go.  Stop by the River Rock Inn, Hayward Bait & Bottle Shop, The Bait Box or Marine General to get the current status of the lake you want to fish.  Most importantly…  Be safe and catch a bunch!