Well…  Our boat is put away for winter, ice fishing shows are over, deer hunting is in the books, and it’s time to turn our attention to what’s happening on the hard water.  Truth be told,   We’re at least 2 weeks into the season as our inland lakes started to lock in right after Thanksgiving.  Much of Chequamegon Bay remains open due to the December warm up we had, but it sounds like we may not be too far away from fishable ice there also.  Here’s what Josh Teigen, Aron Kastern, and Erik Thue had to say about our current ice and fishing conditions. 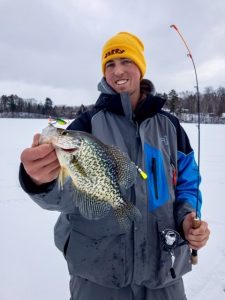 Josh Teigen says that ice conditions are “great” on our inland lakes with 6″ – 10″ of good ice and no slush.  ATV, snowmobile, and foot travel are all fair game, and it sounds like the fishing conditions are just about as good as the ice.  Josh has been on a really consistent panfish bite with a mixed bag of crappies, perch, and gills showing up in 12′ – 18′ of water.  He says hole hopping is a must to stay on active fish, and the best presentations include small spoons and tungsten jigs tipped with waxies.  His favorites are the Kastmaster spoons and ACME tungsten jigs.  For bigger fish, Josh has been concentrating on weed beds and weed edges in 15′ – 25′ of water.  Tip-ups with shiners and Hyper Rattles are producing pike, bass, and a few walleyes at dusk.  It certainly sounds like Josh has all of the bases covered on a classic early season bite that’s happening.  Thanks for checking in Josh! 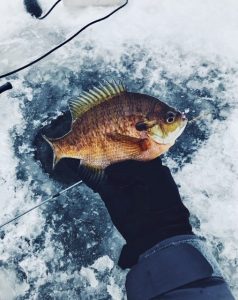 Erik Thue has been focused in on the Hayward Lakes lately, and his ice conditions report is also excellent.  He also points out that people taking advantage of the easy walking conditions should be sure to have ice cleats along as things are pretty slick without a lot of snow cover.  He’s targeting panfish in basins on deep lakes in 26′ – 28′ of water and 10′ – 15′ on shallow lakes.  Tungsten jigs tipped with plastics have been his go to presentation for gills and crappies, but don’t be afraid to throw a spike or waxie on there if the bite gets slow.  Erik says there’s also been a steady walleye bite happening late afternoon into the evening on many lakes while focusing on 22′ – 26′ of water over mud flats or along steep breaks.  Jiggin Raps, Hyper Glides, and rattle spoons tipped with a minnow head are all good bets, and make sure to scatter a few tip-ups with medium shiners or sucker minnows for bonus fish.  And don’t forget those pike!  Erik suggest a tip-up spread along a 4′ – 12′ weed edge, and don’t overlook targeting those same deep water basins where you’re catching panfish.  Let’s face it…  Pike want to eat, and they’ll be where the food is.  A large sucker or shiner should be all you need to get their attention.  Good stuff Erik.  Stay on ’em brother! 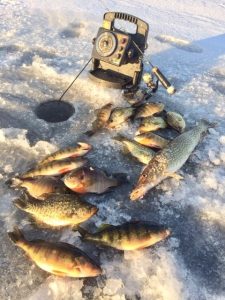 Aron Kastern has been a busy guy lately trying to finish building a new house and get ready for the ice season all at the same time.  So much for any down time!  In between swinging a hammer, Aron has targeted the mixed bag bite on the inland lakes seeing much of the same as reported by Josh and Erik.  He reports good ice and a steady bite for all species.  He has also been getting his Chequamegon Bay ice shack rentals ready to go, and he thinks we may be getting out there sooner than later.  The bay is starting to lock in nicely with 6″ – 10″ in places on the Ashland side, but the Washburn side is still wide open from Bono Creek to Long Island.  There’s actually a good trout and salmon trolling bite going on right now for those of you who haven’t put your boats away yet.  Aron things he may start prospecting the Ashland side right after Christmas if the weather forecast holds up.  As always, remember that Lake Superior and Chequamegon Bay ice is a completely different circumstance than our inland lakes.  Never assume the ice is good, and never take chances.  Aron and his crew will keep us posted on any developments from the big water, and we’ll keep you in the loop on our next report.  Good luck wrapping up that house project Aron.  That’s one heck of a nice Christmas gift for Lacey and the kids, and it’s going to be a hard one to top!

It sounds like I need to fire up the auger…  No excuses.  We’ve got good ice, good fishing, and it’s time to get after it!  Josh, Aron, and Erik will be checking in with us throughout the winter, and I’ll keep you posted on the latest conditions both above and under the ice.  Safe travels to all of you over the holidays wherever you may be.  Merry Christmas, and Happy New Year!!!