Well, it’s been an eventful week around here for lots of reasons.  We had a new addition to our family.  Ms. Berkley arrived at our home after 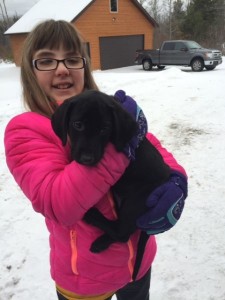 her journey from Minnesota on Saturday, and she’s already become irreplaceable.  Morgan has a new buddy, and we have a new fishing partner.  However, her football allegiance has come into question.   Now I’ve never been into conspiracy theories, but we did have to wonder if a dog from Minnesota had something to do with the Packer loss on Sunday…  We love you anyway Berkley!!! 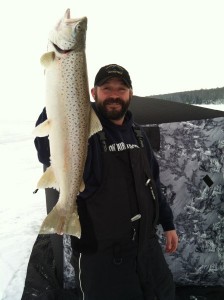 Despite all of the excitement around my house, Josh and Aron were still getting after it on Chequamegon Bay and the Hayward Area Lakes.  Aron Kastern reports strong mixed bag catches on the bay of browns, splake, lakers, and whitefish as they are finding safe ice around Bayfield.  Most days have produced plenty of action, with a slow one mixed in here and there.  Aron has been concentrating his efforts in 15′ – 50′ of water and has found 10″ – 14″ of ice in the areas he’s fishing with ATV and snowmobile travel being very smooth.  Splake are running 14″ – 17″ with a few over 20″.  Most of the browns caught are in the 20″ range with a few in the mid 20’s, and lakers have been anywhere from the mid teens to mid 20’s with a few larger fish being lost.  Check out this cool still photo taken off a GoPro of a great looking red fin 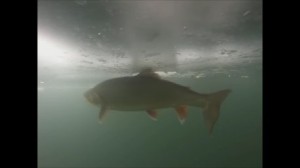 laker that Aron lost at the hole.  Big lakers don’t come in easy!!!  Check out our Facebook page to see the video footage of a great battle on light tackle.  Awesome footage Aron.  Maybe next time brother!!! 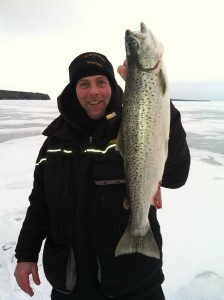 Dan Sullivan of Ashland, WI and Rachel Staeffler of Rainier, OR spent a day with Aron catching nice splake and browns.  Aron says they’ve been using jigging spoons and pimples along with set lines and tip ups set up along edges and flats.  Shiners and golden shiners are the live bait of choice for set lines and tipping your spoons, but Aron also says that tipping your jigging spoons with waxies will produce fish as well.  On slower days, Aron recommends grinding it out in areas where you know there’s fish.  Patience usually pays off at some 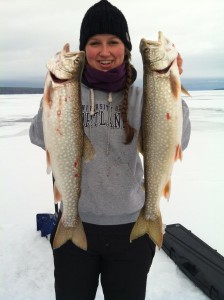 point, you just never know when! 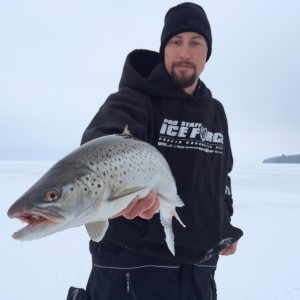 Aron also spent time this week with Will Rosenberg from Hanover, MN.  Will makes frequent appearances on In Depth Outdoors, and he made the journey to Chequamegon Bay to get his trout fix.  Although it was a slower day, Aron and Will were able to ice a few nice fish, share a few stories, and make the best of a day when every bite was earned.  We’ll be watching for Will’s next adventure on IDO, and we look forward to his next visit.  There’s a big laker out there with your name on it Will!  As long as temperatures cooperate Aron will 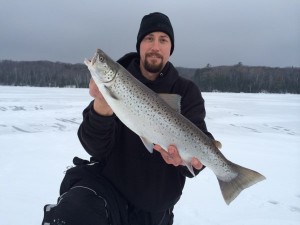 continue to push out around the Apostle Islands as far as safe ice is available, and he’s hopefull that the big laker bite will be an option in the near future.  We’re looking forward to it as well Aron! 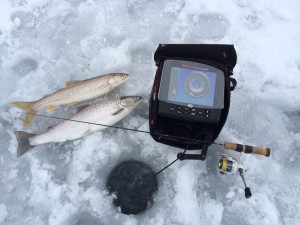 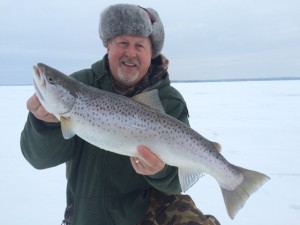 Josh Teigen spent his time both inland and on the bay last week.  Rick and Bill spent two days with Josh chasing trout on Chequamegon Bay and caught lakers up to 22″, splake up to 18″, whitefish up to 22″, and browns up to 26″.  They fished 10′ – 55′ of water, and their fish came on tip ups and jigging spoons such as Kastmasters, and Northland Buckshots.  Shiners were the bait of choice, and Josh also reports smooth snowmobile travel with plenty of good ice in the Washburn and Bayfield areas.  The near 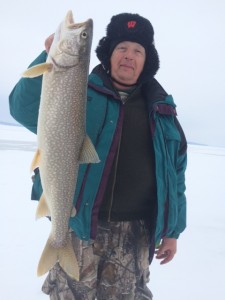 shore bite remains fairly consistent for Josh and his customers, and mixed bag catches continue to keep the days interesting as you never know what the next strike will bring. 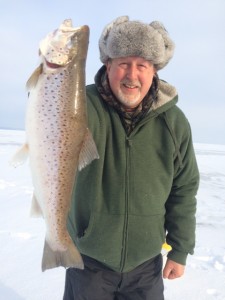 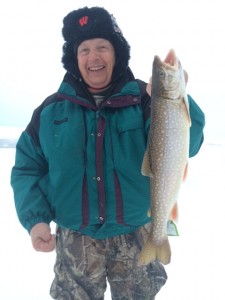 After working over the bay, Rick and Bill decided to try their luck inland.  Josh put them on some nice walleyes including a fat 21″ fish while setting tip ups with sucker minnows along weed edges in 15′ – 25′ of water.  These guys definitely took advantage of the multiple fishing opportunities our area has to offer as Josh put them on a variety of fish in different bodies of water.  The possibilities are endless!!!  If you have the time and motivation, Josh will make sure you get the most out of every trip. 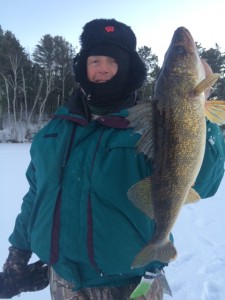 Thanks again to Aron and Josh for more great stories, photos, and reports.  I’m already looking forward to see what next week will bring!  Be safe, and have fun out there everyone!!! 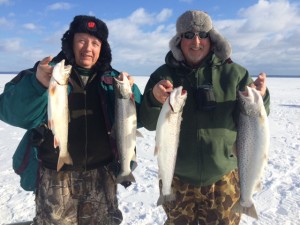