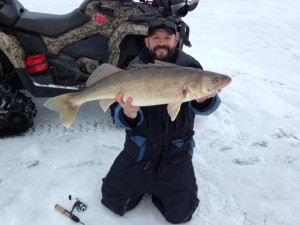 Slowly but surely, our ice fishing season is ramping up!  Last weekend’s warm up and the cool down that followed has left our ice conditions on Chequamegon Bay in pretty much the same shape as our last report.  The only change would be on the Washburn shoreline where ice thickness ranges from 7″ to only a few inches in some areas.  Aron Kastern reports that extreme caution should be used if you venture out on that side of the bay.  On the Ashland side, Aron reports 7″ to 10″ of good ice with just a dusting of snow making for perfect travel conditions on ATV’s, snowmobiles, or walking.  As for the fishing…  Aron and his crew made it out for a couple of scouting trips again and found a nice mixed bag of walleyes, pike, and perch along weeds in 10′ – 20′ of water.  The walleyes included a 31 1/2 ” whopper landed by Aron himself.  What an amazing fish!!!  There are definitely some beasts swimming in the bay, but that’s a mega walleye anywhere.  Congratulations Aron!  Pike sizes ran up to 38″, and perch ran from 10″ – 11″.  Our picture of the 38″ pike is missing in 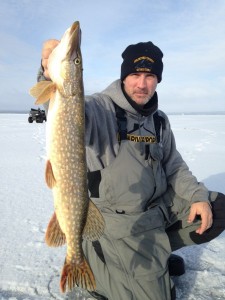 action, so you have to take our word for it!  Maybe it was 48″ Aron???  Light spoons and buckshot spoons tipped with shiners, waxies, and crappie minnows all produced fish as Aron, his wife Lacey, and buddy Davis Oliphant put together a couple of very nice outings while warming up for the holiday rush.  Tip ups with sucker minnows and shiners are producing fish as well.  Aron has also heard of a few whitefish and trout being caught scattered around the bay.  Great job by Aron, Lacey, and Davis this week.  When can I expect my perch fillets to be delivered Aron??? 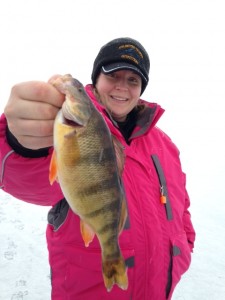 We don’t have any inland information to report, but Josh Teigen will be chasing some walleyes with customers this week.  Our next report should have some up to date information on ice conditions and what’s biting inland.  Have a great week everyone.  Tis the season!!! 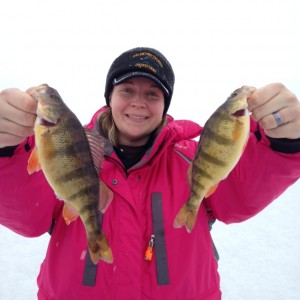