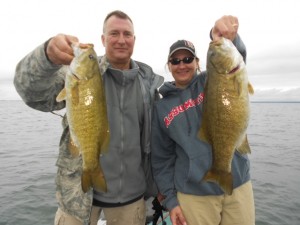 We hope you all had an outstanding Labor Day weekend.  Fall is definitely in the air, and fish patterns are certainly beginning to swing.  After a soggy Friday, Saturday was spent back on Chequamegon Bay.  Thankfully the rain held off, and we were able to put together a good day with some nice fish.  Hank Siebert from Clarksville, IN along with his son John Siebert from DePauw, IN and daughter Anne Fenske from Dewitt, IA joined me for another cloudy day on the bay.  We’ve had plenty of those over the past month.  Nothing came easy, but plenty of fish up to 21.5″ were caught.  We just can’t crack that 21.5″ mark this year.  That’s still an incredible fish though!!!  You can decide who caught the biggest out of this father, son, and daughter crew.  I’m not getting caught in the middle of that argument!  We also had a couple of outstanding doubles that 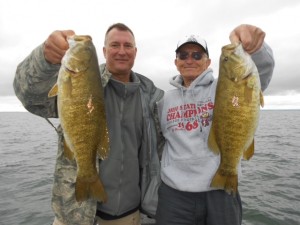 topped off a very fun day with some really great folks.  Water temps in the bay continue to hold around 65 degrees, and we caught everything on minnows in 12′ – 18′ water.  John is a career Air Force man that will be deployed to the Middle East in the near future.  Thank you for your service John, and best wishes!  Regardless of who had the largest fish, Hank, John, and Anne did an outstanding job.  Way to go gang! 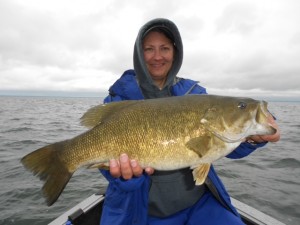 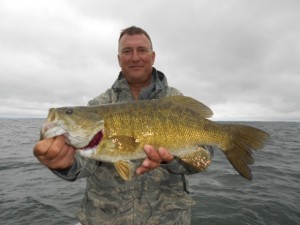 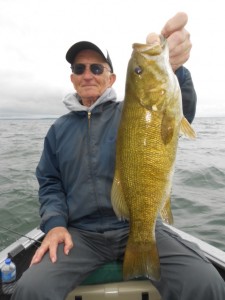 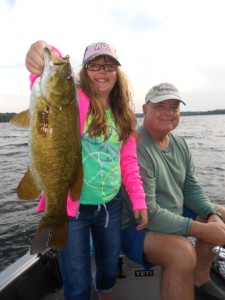 A last minute change in my schedule gave me some unexpected free time around the house on Sunday and Monday.  What’s a guy to do???  After taking care of a few odds and ends on Sunday, I loaded up Morgan and my father for a few hours of fishing on a lake close to home.  We poked around some deep weedlines and found big bluegills up to 10″ and smallmouth up to 18″ in 15′ of water.  Everything was caught on nightcrawlers, and we had 71 degree water temperatures throughout the time we fished with thunderstorms moving in.  A few of the nicer gills went in the livewell for a fresh fish fry when we returned home.  Not a bad way to spend a day and a great way to spend an evening.  Nothing better!!!

With plenty of rain and storms over night, Morgan and I let the weather clear on Monday before heading out to do a little crappie scouting.  We only had a couple of hours to fish, but fortunately found some willing participants in short order.  We located suspended fish in 18′ – 20′ of water and used jigs with plastics to catch plenty of fish up to 11″.  I’ve been searching for a good crappie 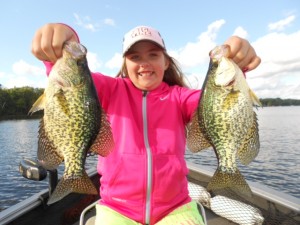 bite for some of our fall trips, and this definitely has promise.  Morgan and I had 69 degree water temperatures along with stiff west winds that were pushing out the weather system that had been pounding us the night before.  Morgan did an outstanding job feeling the bite and setting the hook on her last outing before school started the following day.  Daddy’s little girl is back to school.  I don’t know who hates the end of summer more…  Best wishes at the big school Morganator.  You’re awesome!!! 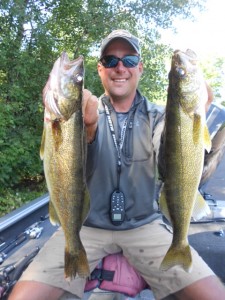 Tuesday was scheduled to do some scouting for our upcoming trips, and Terry Peterson joined me to help figure out some patterns.  I couldn’t have had a better guy in the boat!  We were determined to find active walleyes, and found some nice fish in up to 17″ in 15′ – 18′ of water along weed edges with jigs and minnows.  They were surprisingly aggressive for this time of year.  We also caught quite a few smallmouth up to 17″ which made for a fun mixed bag day.  Water temps started at 69 degrees and warmed to 72 degrees on a beautiful day with warm temperatures, west winds, and high skies.  It was a perfect day for fishing, and we accomplished everything that was needed.  Now they just need to keep biting…  Even though I’m not ready for it, bring on fall!!!