Tarpon fight.  I mean fight.  There is no other way to say it.  They jump. They run. They dive.  They are magnificent! 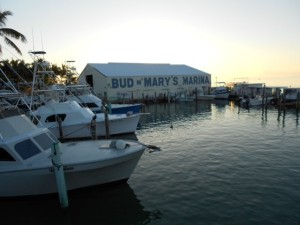 In 2010, I made my first trip to what is widely known as the “Sportfishing Capitol of The World”.  Islamorada, FL consists of five islands in the Florida Keys sandwiched between Key Largo and Marathon.  Home to the oldest and largest fleet of charter boats in Islamorada, Bud N’ Mary’s Marina had been on my mind for many years.  A lifelong passion for all things fishing has driven me to research various opportunities around the world and in particular, North America.  Having a father who was generous enough to introduce me to Canadian fishing at an early age probably had a lot to do with the fact that I’m always looking for another adventure.  Ernest Hemingway’s, “Old Man and the Sea” captured my imagination as a teenager, and I always knew that someday I’d find myself chasing prehistoric fish in water that’s every shade of blue that exists.  I’ve also known that some of the most knowledgeable and seasoned fishing guides in the country call Bud N’ Mary’s home.  My curiosity in the fish they catch, the methods they use, and the lives they lead ensured that someday I’d experience it for myself.

Lucky for me, a vacation in the Keys is not a hard sell to a wife and daughter who love sun, sand, and flip flops as much as I love to fish.  What they lack in glitz, glamour, and amusement parks typically found throughout the rest of their state, the Keys make up for with incredible ecosystems, down to earth people, laid back atmosphere, and sunsets to die for.  Our kind of place!  It’d be safe to say that I’ve built up a little equity with the guides at Bud N’ Mary’s over the years considering our first trip came right in the middle of a record setting cold front that almost completely shut down the fishing.  It didn’t matter.  After my 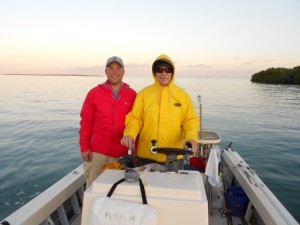 first trip with Captain Vic Gaspeny, I knew I’d return.  There’s something about guys who know what they’re doing.  Even if the fishing is tough, they’ll keep you coming back for more.  One thing is for certain.  Vic knows what he’s doing.

To try and accurately describe Captain Vic is almost an injustice to him and his legacy on the water surrounding Islamorada, but I’ll do my best.  Knowledgeable, talented, accomplished, humble, patient, and a true gentleman are some of the words I’d use.  Although there are many proficient guides working out of Bud N’ Mary’s, there’s a reverence for Vic that’s noticeable from the time he leaves his slip to the time he returns.  Everyone keeps a close eye on him because they know he catches fish, particularly tarpon, even when others struggle.  Vic’s approach to fishing takes into account every variable that exists including weather, tides, current, forage, etc.  If you spend five minutes on the phone with him, you can tell this man thinks like a fish, and you won’t question any decision he makes.  So when he said, “Meet me at the marina at 3:45 a.m.”, my immediate response was, “Sounds good, Vic.”  After I hung up it hit me…  “Did he say 3:45 a.m.?”  As mentioned earlier, my father Jim dragged me along on many fishing trips when I was a kid, and it’s been extremely good fortune that I’ve had the same opportunity to bring him along on my recent adventures to the Keys.  When I told him what time we’d be meeting Vic, he had a puzzled look on his face.  “Don’t question Vic, Dad.”  End of discussion.

Rolling out of bed several hours before daybreak isn’t exactly how most people start a vacation, but this is different.  Whenever you’re out with Vic, something great could happen.  I was like a kid waiting to open presents on Christmas morning.  I’m not sure my father felt the same way, but nonetheless we were both on time and found Vic waiting alone for us at Bud N’ Mary’s.  As we slid out of the marina and into the darkness, I had to chuckle.  All of those boats, and we’re the only ones heading out…  As we motored to our first location, Vic explained that the tarpon bite hadn’t been strong as of late, and he was hopeful we’d get at least one hook up.  Now I can’t be sure if this was his honest assessment or not, but I was happy he was off the mark.  What happened over the next few hours was a tarpon fisherman’s dream. 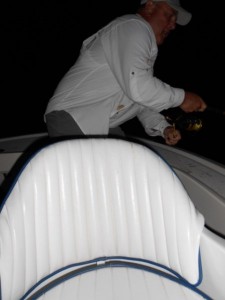 With the most incredible display of shooting stars, a bright moon, and Venus lighting the way, we set up shop along one of the many bridges that connect Key West to the mainland of Florida.  With the anchor out, we could immediately hear tarpon breaking water all around us, and it immediately felt like a “fishy” kind of trip.  Thankfully, my father and I had some previous experience with Vic because there wouldn’t be much chance to ease into things.  As he set out our first rod while instructing us on protocol in the event of a hook up, the reel began screaming and we were locked into a fish.  Are you kidding me?!  Vic slammed the rod into my dad’s hands, and I instinctively dove to release the anchor rope.  Vic spun the boat and away we went.  If you’ve never fished tarpon in the bridges, trust me when I tell you it’s not for the faint of heart.  It’s quite possibly one of the most exciting, thrilling, and challenging experiences sport fisherman can have, especially on the light tackle Vic uses.  Tarpon are no fools and as Vic explains it, thousands of years of evolution and survival have given them the instincts to know that wrapping around those concrete bridge pillars is their best shot at freedom after being hooked, and they’re damn good at it!  In some ways, you feel helpless as the fish is peeling off hundreds of yards at will, and there’s nothing you can do but hold on and hope that you can get the boat in position to fight them before you’re hopelessly wrapped in an unforgiving maze of jagged cement.  Every strike is a fire drill requiring all in the boat to act as a team with distinct roles that need to be executed flawlessly if you even stand a chance of fighting one of these fish to boat side.

One after another, we hooked up and proceeded to lose fish.  Some fights lasted longer than others.  They were all exciting to be sure, but the results were the same.  After seven unsuccessful attempts, yes I said seven, I must admit that a little doubt started to creep in as to whether we’d get a “Silver King” to the boat.  My dad and I had both caught tarpon with Vic in the past, but never in the bridges, and any angler that’s done it will tell you it’s a completely unique experience.  Surely seven hook ups in a four hour trip would be all a guy could 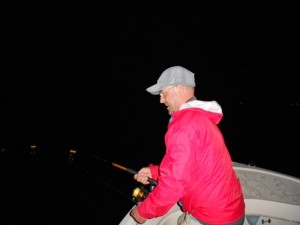 ask for.  Heck…  We were even running out of rods.  The previous battles had all but destroyed most of Vic’s rigs, and we were down to his spare set ups.  Honestly, I’d accepted the fact that we may be done and was good with it.  The action we were experiencing was a thrill we’d never forget, and those are the kind of memories that keep us coming back for more. 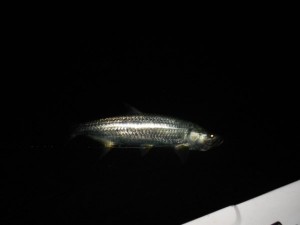 Not so fast.  With the boat in position once again, we were well versed in the routine at this point.  Dad was up and into yet another fish.  Once again Vic masterfully guided the boat through the bridge, the line cleared the pillars and away we went.  This one was ours!  Tarpon fight.  I mean fight.  There’s no other way to say it.  They jump.  They run.  They dive.  They’re magnificent!  After pin point fighting instruction from his captain along with meaningless shouting in the background from his son, Jim landed his tarpon.  It was a well earned and well deserved trophy for a man who did himself proud.  As we admired dad’s fish alongside the boat, I couldn’t imagine having more respect for anything that swims.  They’ll humble you, even after the battle has been won.

With the boat back in position and sun peaking up over the horizon, I was content.  What a night it had been.  We only had a short while left in our trip and began reminiscing about the past few hours.  I’m sure Vic has seen about everything there is to see on the water, but I could tell that even he was impressed with what had transpired.  Well, maybe impressed isn’t exactly the 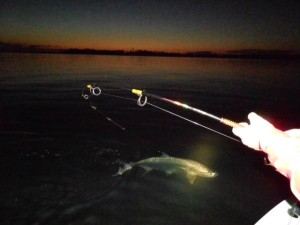 word Vic would use knowing that he had hours of re-rigging rods to look forward to after nearly everything in his boat had been destroyed.

Sunsets in the Keys get plenty of well deserved recognition for their stunning beauty, but I’ll tell you that the sunrises are underrated and well worth the price of admission.  As night began to fade I had to wonder, “Did we have another fish in us?”  The sky transformed into unbelievable variations of red, orange, yellow, and blue, and the drag screamed once again.  My turn!  Away with the anchor, spin the boat, rod low, and off we go.  This was a big fish for sure, and it was confirmed quickly as he made his first of several breathtaking leaps when we blew through the bridge opening.  It’s a sight that’s burned into my mind that I’ll never forget.  The next several minutes of the fight remains a blur.  Tarpon have a way of making you feel incredibly inadequate.  I’m not sure how many fish I’ve landed over the years, but it’s been more than a few for sure.  This tarpon didn’t seem to care much about my fishing resume, however.  Every time I thought he was licked, another hundred feet of line would rip off.  Vic could sense the fight was nearing an end however and calmly said, “Just enjoy it, Jeff.”  I don’t know if I’ve ever received a better bit of advice.  After a few pictures Vic popped the hook and away she swam.  “At least a hundred and twenty pounder,” he thought.  Muscles quivering and knees shaking, I fell into my chair.  I may have won the fight, but I couldn’t help but think that fish had gotten the best of me.  In fact, I know it did… 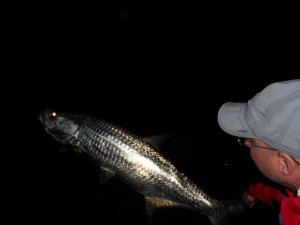 Upon our return to Bud N’ Mary’s, it was bustling with guides and their customers getting ready to head out for the day.  I’ve never been much of a poker player, so the look on my face must have been a dead giveaway.  As we pulled into Vic’s slip, another guide heading out with his crew looked at us and commented, “Let me guess.  They bit like hell until the sun came up?”  There was no need for Vic to respond.  He just nodded and grinned.

If tarpon aren’t on your list, they need to be, and Captain Vic Gaspeny is your man.  I don’t know of anyone better and can’t recommend him highly enough.  He can be reached by contacting Bud N’ Mary’s Marina.  You’ll be glad you did!