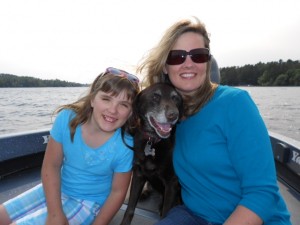 What happened to our fishing season???  The change of seasons is one of many benefits to living in the north country, but the transition from fall to winter is always a difficult one for me.  It literally feels like yesterday we were driving around on opening weekend looking for any open water we could slip our boat into.  As I write this we have a fresh covering of snow on the ground and our lakes are making ice by the minute.  I’m not one to dwell on the past, but we’ll take a moment to reflect on our 2013 open water season that was remarkable not only for the fish we caught, but for the new memories and relationships that were created along the way as well. 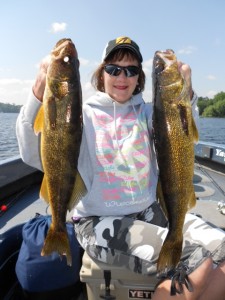 The late spring we had appeared to have set us back three weeks in our normal fishing patterns and I’d have to say that the trend continued throughout the summer and into fall.  It was certainly strange to experience certain patterns late into the summer that normally vanish with the rise in water temperatures, but it was also another endorsement that mother nature knows best and seems to adjust as needed.  In our Spring Wrap Up, we were coming off some of the greatest walleye fishing I had experienced in recent years.  The trend continued through August, and The St. Louis River solidified itself as one of the healthiest walleye fisheries that exists in the upper mid-west in my opinion.  We had numerous days of big catches not only in numbers, but in size as well.  Many fish in the mid to upper 20″ range were landed with a lot of personal bests logged as well.  Big walleyes are special creatures, and I always get a kick out of customers reactions when they see one in the net.  Magnificent is only one word to describe it.  The St. Louis River bite stayed strong and received most of my attention through Labor Day.  When September arrived, I was pleased to see that we still had a fairly strong inland bite.  The Hayward Lakes area continued to produce strong catches for us until mid September.  Then things got a little wacky.  Again, the “three weeks” behind thing took effect.  In “normal” years, our walleye bite will slow mid to late August.  On cue with the rest of this season, the bite became very inconsistent a few weeks later than usual.  Even though fish were still there to be caught, the bite slowed for a period of time.  We were able to grind out fish on most days, but they were extremely finicky and the larger fish disappeared.  I think they all  had full bellies from the previous four months!  October usually means “Big Fish” time for us, and this year was no exception.  What you may sacrifice in numbers at this time of year, you can make up for in size.  Smaller fish can still be caught in great numbers if you target them, but giant walleyes are different creatures.  As our water temperatures cooled into the 50’s and 40’s, the big dudes found their appetite again with some monsters up to 28.5″ getting their pictures taken and returned to get even larger.  Chase Christopher landed a dandy 28.5″ fish during the final minutes of his trip in September and John Koleske put a fat 28″ fish in the boat on the last day of the season.  It was one of the roundest walleyes I’ve seen, and it would’ve been interesting to get an accurate weight on it.  With or without a weight, it was a PIG!  Although we never cracked 30″ this year, we were darn close.  Soooo close!!!  Who’ll be the first to get one in the net next year? 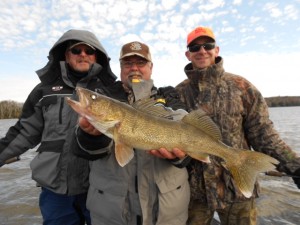 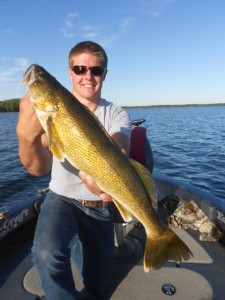 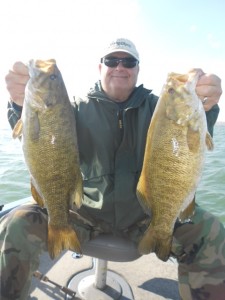 Smallmouth kept pace with the walleye fishing through mid August with the Hayward Lakes Area producing good numbers and many fish in the plus 20″ class.  Our spawn pushed into July this year and the patterns followed suit.  We’re truly blessed to have the incredible smallmouth fishing we do right in our back yard, and I try not to take it for granted.  This is definitely a special place in the world of smallmouth fishing, and I’m reminded of that every time someone ties into a bruiser bronzeback.  The smile on their face that they can’t hold back says it all!  As the inland bite stayed strong through mid August, the bite on Chequamegon Bay became a bit inconsistent as fish transitioned to traditional mid summer haunts.  Normally, this process would have been complete in July, but fish remained somewhat scattered.  Good catches of large fish were still had, but the best was yet to come.  As we moved into September, “The Bay” got rockin and rollin with some days for the books.  Wind was definitely a key factor, and when we had the right conditions it was pure chaos!  Big numbers days with doubles and even triples made it look like the circus was in town, and our customers got to experience some of the best smallmouth fishing of their lives.  I always tell people that you’ll know it when you see a 22″ smallmouth because they just look completely different than any other fish, and we got an up close and personal look at some giants that make you realize just how incredible this fishery really is.  Corbin Shouse and Jim Hancock can attest to this as they both landed 22″ monsters.  The typical August slow down that occurs on inland lakes arrived at the end of August and extended into September with fish becoming inconsistent and fickle to say the lease.  Big fish were still caught, but numbers were a struggle at times with weather conditions playing a large factor.  Water temps stayed in the 70’s for quite some time, but once they began to cool in mid September, the smallie bite returned with a vengeance.  Late September through October was incredible in the Hayward Lakes area, with many days producing multiple 20″ fish and non stop action.  It’s often said that pound for pound, smallies are the hardest fighting fish that swims.  I find it hard to argue with that logic.  What a blast!!! 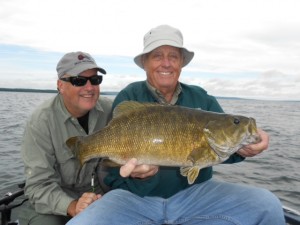 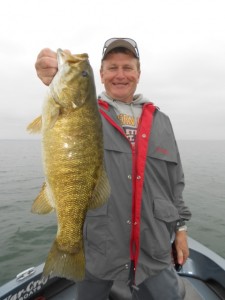 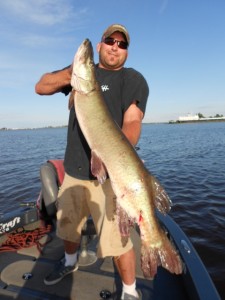 For no particular reason, muskies didn’t receive a lot of attention this year.  The few trips we did during July and August produced mixed results highlighted by a 45″ fish caught on the St. Louis River by Steve Naglosky.  Steve and I had spent most of the day walleye fishing, and decided to wrap things up with an hour dedicated to muskies.  It was one of those hours…  Musky fishermen often talk about feeding windows, and we found ourselves right in the middle of one.  Steve had three different fish blow up on the top water bait he was throwing, and finally connected on a beauty.  It was his personal best.  After landing his personal best walleye a few hours earlier, it was certainly a day to remember!  The June flood of 2012 dramatically changed the weed structure in the St. Louis River and Harbor.  Weed beds that we traditionally fished were non-existent, and the fish appear to have developed different patterns as a result.  Although it was a bit disappointing, the river has proven resilient over time.  New patterns will certainly emerge, and I’m hopeful the river and harbor will return to the world class musky fishery it’s known for.  In most years, we’ll stumble into a few big pike while musky and walleye fishing.  This year was no exception, although the “pike of the year” came while smallmouth fishing!  Jim Hancock landed a 40″ beast on Chequamegon Bay in September that looked like it had a few smallies over for dinner if you know what I mean!!!  Our late October musky trips on the Hayward Lakes were a challenge to say the least.  We were snake bit with ridiculous weather conditions that made every trip a struggle on some level.  Welcome to musky fishing!  If we had a musky trip scheduled you could bet the wind was going to blow and the bite was going to be tough.  I think we were also paying for the epic October of 2012 that spoiled us.  I should’ve known better…  We had several encounters with big fish and landed a fat fish on our last musky trip of the season.  All in all, not bad considering the time put in.  One thing’s for sure…  the Gensmer men and I have a score to settle with a very large fish next year! 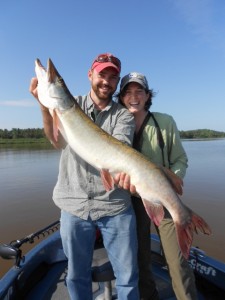 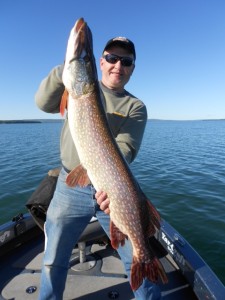 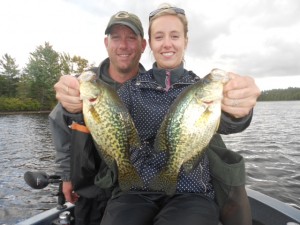 The open water season usually begins with crappies, and it usually ends with crappies.  As the water cooled in September and October, fish began congregating in main lake basins and provided tons of fun.  We had a blast catching numbers of fish along with enough eaters to send everyone home with a bag of fillets for the pan.  The most memorable crappie trip had to be when long time customer Mike Daubner proposed to his girlfriend Meghan in my boat.  That was a first, and a day that I’ll never forget.  Thankfully I didn’t drop the “prop” ring in the water, and she said “yes”.  Otherwise that would’ve been one long weekend!  Our fall crappie trips are just plain fun.  There’s no other way to describe it.  Fall colors, lots of fish, and lots of laughs always make for great days and great memories.  I always look forward to these trips and hate to see them come to an end.  It’s a perfect way to close out the season. 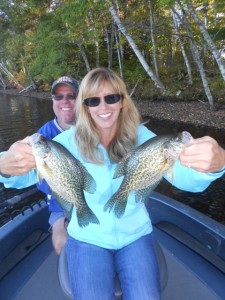 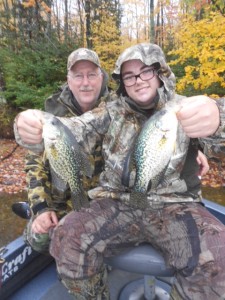 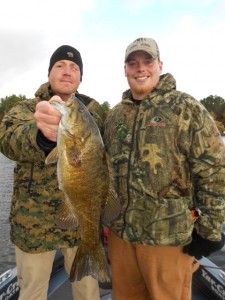 In the Spring Wrap Up, we wrote about our incredible experience with my friend Don Christensen.  Good fortune struck again, and I was asked to guide two soldiers from Wounded Warriors In Action for a day in October that I’ll never forget.  What an honor and privilege to share my boat with Josh Krueger and Brandon Johnson, two U.S. Marines that put themselves in harms way so you and I can enjoy the freedoms we have.  It was one of the most humbling days I’ve ever spent on the water, and I’m grateful to have had the opportunity.  These guys are true heroes in every sense of the word.  By the way…  They also caught some nice fish, both landing their personal best smallmouth bass.  I’m forever grateful for their service and the opportunity I had to spend the day with Brandon and Josh.  They definitely make you proud to be American and thankful for all of our soldiers and their families that sacrifice so much.  Thank You!  Thank You!  Thank You! 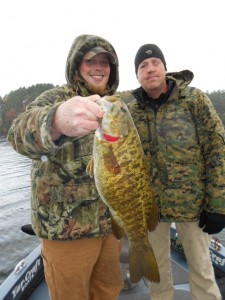 A big THANKS to all who have made this a magical season that I’ll never forget.  I’m so grateful for all of you that return year after year, and I always look forward to our next trip.  Your support and friendship are truly appreciated.  Thank you as well to all of you that have faithfully followed my reports and blogs.  You’ve kept me focused and motivated, and I promise to keep you up to date and informed on what’s biting, what’s not, and everything in between.  Last but certainly not least…  Thank you to LeeAnn and Morgan for putting up with me for yet another season.  You guys are awesome, and I am blessed! 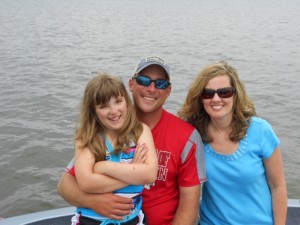