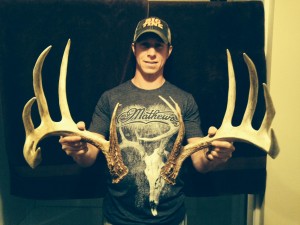 At the end of my open water guiding season I left for Indiana in a cloud of dust on my annual pilgrimage to the Big Tine Ranch in Indiana to hunt big bucks and spend time with close friends.  Mike and Kathy Bassett have been gracious enough to give me access their property over the years, and it has spoiled me to no end.  I was also joined by my good friends from The Hunt, Greg and Jake Miller along with camera men Matt Tande and Chad Calhoun.  Regardless of the outcome, this is always a memorable trip that I look forward to every year.  Those who follow deer hunting closely probably know that central Indiana was hit hard by a drought last year that resulted in an outbreak of EHD that claimed many big deer.  Unfortunately, the Big Tine Ranch was right in the middle of it.  It made us all sick to know that the big deer Mike had managed on his property were gone, but it was also a humbling reminder that Mother Nature trumps all.  Above, Matt Tande holds the sheds of a buck we hunted for 6 years.  His remains were found last summer in a dry creek bottom.  It was an unfortunate end to the life of a legendary buck that gained mythical status among those of us who hunted him.  I wasn’t sure what to expect upon my return after such a devastating setback to the herd.  One look at scouting camera pictures upon my arrival revealed some pleasant surprises.  We had images of two deer that we had previously hunted along with a couple of newcomers that had moved into the area.  The hunt was on!

During my first evening on stand, I rattled a good looking three year old 8 pt. within 15 yards who was looking for a fight.  Although this would be a respectful deer to be shot in most places of the country, it’s not the reason we hunt this sacred place.  Part of Mike’s management strategy is to let these bucks grow as old as possible, and this guy definitely needed to live.  With a promising start, I was hopeful that the rut would be in full swing and an opportunity at a giant would present itself.  Greg, Jake, and I spent the next week on stand that included many encounters with deer, but the big guys disappeared.  Rut activity was nearly non existent, and the woods were strangely quiet for this time of year.  Funny how that works!  Mid week provided some excitement when I had shooter buck respond to a grunt but hung up out of range.  Greg and Matt also got some great footage of a big old 8 pt. we had scouting pictures of.  Wouldn’t you know it???  He didn’t follow the script and followed a different path than the does he was following.  That’s why big bucks are big bucks!

After being away from my girls for too long, it was time to head home.  Although no shot was taken, it was still a good hunt with some great encounters and great memories shared with great people.  It was also amazing to literally watch the deer herd rebound before our very eyes with the promise of world class hunting we have become accustomed to on the horizon.    The whitetail woods is a magical place in November, and I’m thankful for the ability and opportunity to hunt these magnificent animals.

Upon my return home, I received a call from Mike.  Apparently all heck had broken loose in the woods.  Greg and Jake were still hunting, and the big bucks were on their feet.  Of course they were…  I was at home!  That night I received the text I was waiting for.  Jake had killed an old buck that he and Chad had been hunting all week.  Chad was on point, and the footage will be featured in next season’s show.  What a well deserved and well earned trophy, and what a great conclusion to the hunt.  Congratulations to Jake and Chad! 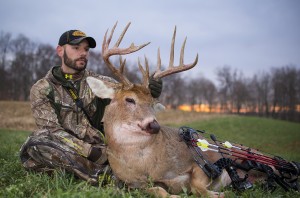 Thank you to the Bassett’s and the entire Big Tine family for your incredible accommodations, hospitality, and friendship.  I can’t wait until next year!