My childhood was full of distinct memories of my grandmother, and my connection to her will come as no surprise to anyone who knows me, FISHING!  Grandma loved to fish. 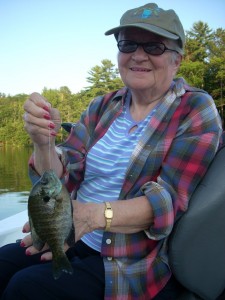 As Jesus was walking beside the Sea of Galilee, he saw two brothers; Simon called Peter and his brother Andrew.  They were casting a net into the lake, for they were fishermen.  “Come, follow me,” Jesus said, “and I will send you out to fish for people.”  At once they left their nets and followed him.

My grandmother, Doris, truly embodied the definition and our perception of “Grandma”.  As I reflect on all of the memories, they resemble the cross stitched quilts she made for all of her grandchildren.  Every memory is intertwined and results in the legacy she left.

She grew up as the oldest of three children on the banks of the Des Plaines River in Wheeling, IL during The Great Depression.  As the oldest child, I can only imagine the hardships that she, her sister Shirley, and brother Bud endured.  History tells us that her father, Cloice Wieder, was a founding father of Wheeling.  Although I never met him, I have no doubt that he was a great man.  Her mother, Ethel, on the other hand was everything a Great Grandmother represents.  Kind, caring, compassionate, and a great cook!  Nobody ever went hungry at Granny Wieder’s, and I am thankful for the time that I had with her.  Despite a valiant effort, she never did get me to like minced meat pie, but I certainly give her credit for trying!

Grandma eventually married Dean Meacham and started a family.  They raised my mother, Jan, in a home that my Great Grandfather Wieder had built for them.  Grandpa Meacham worked for the Soo Line Railroad and Grandma worked as a telephone operator for Illinois Bell.  If you remember watching the Andy Griffith Show on television, that is how I envision Grandma.  Nothing happened without her knowing about it, and there was no communication in town without going through her.  Grandma was at the center of everything that was Wheeling, IL.  I can only imagine the stories that she didn’t tell…. 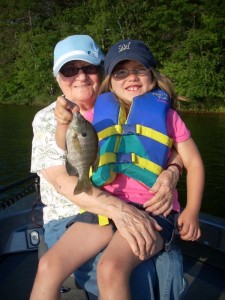 After graduating from Illinois Wesleyan University, Jan married my father Jim, and they began a family of their own in Hayward, WI.

My childhood was full of distinct memories of my grandmother, and my connection to her will come as no surprise to anyone who knows me, FISHING!  Grandma loved to fish.  While I was growing up in Hayward, she would visit in the summer to help out while my mom and dad tended to their business.  I can only imagine that the location of her daughter’s family was nothing short of a stroke of good fortune for her.  Hayward is the home of the Fresh Water Fishing Hall of Fame and the World Record Musky.  How many fishing Grandmas could be so lucky?

Grandma and I would drive to the Nelson Lake Dam in her maroon, four on the floor, Chevy Chevette.  Those of you who drove in the 70’s know the car, a true classic!  We had to bend the rods to fit under the hatch, and would go to Pastika’s bait shop to purchase a dozen nightcrawlers for 25 cents.  Leon Pastika, who passed away in September, would hand us our bait in a brown cardboard container that conveniently said “Bait”, and we would be on our way.  We would spend the day fishing, with our species of preference being Bluegills.  Grandma loved her fish.  As anyone who grew up during The Great Depression knows, you don’t throw a perfectly good meal back in the water.  No indeed, these fish were to be scaled, gutted, and fried in corn meal.  If you fished with Grandma, you would be keeping your catch, which is something that I found ironic as the years went on.  The concept of “Catch and Release” never made much sense to Doris.  I guess I can’t blame her.  When the day was done, we would stop at West’s Dairy and have an ice cream cone before we would arrive at home to clean our catch.  Can you imagine a better day?

Our relationship extended beyond the water.  I believe that it was the summer after I had completed sixth grade that Grandma was to be in charge of me and my siblings while mom and dad pursued graduate degrees.  We were living in New Lisbon at the time.  I suppose, like most twelve year old boys, I was willing to test the waters of which I was confined.  One night, I decided to stay at the city league softball games with my buddies later than previously agreed upon.  The result was a twelve year olds worst nightmare.  Here comes Grandma in the Chevette… Jenny, Jocelyn, and Jason all crammed in the back… and she was not happy!  My final recollection of the evening is Grandma uttering the most infamous words ever communicated by a Mother in Law, “You are going to be just like your father!”  Sorry Dad.  The next day, I rode my bike to the Lemonweir River and brought her home a stringer of Bluegills.  Problem solved!

My family moved to Ashland in 1989, and in 1999 Grandma followed.  The Wheeling she grew up in didn’t resemble the community she 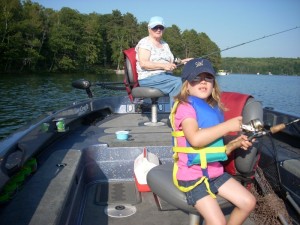 now lived in, and she wanted to be close to her family.  The quiet suburb that once was Wheeling was now nothing more than an extension of the big city, and it was time for Doris to leave.  Although it must have been hard to leave Shirley as well as dear friends Sylvia and Cathy, Grandma was ready to open a new chapter in her life.  We are forever thankful that she did.  The move was an event, to say the least.  When I arrived at her apartment, I quickly recognized that she wasn’t in the home that I had remembered Grandma living in.  Urban sprawl had taken over.  Despite an emergency stop and repairs to a faulty U-Haul on the north side of Chicago, we arrived safely at her new home, Ashland Arms apartments.

Grandma made great friends at Ashland Arms.  Florence, Mary, Pat, Millie, and many others became trusted companions that she would socialize, walk with, and eat with.  These friends were instrumental in providing Grandma with the companionship and support that she needed in her retirement years.  She always looked forward to walks, lunch at the Breakwater Cafe, and coffee in the social room at Ashland Arms.

Grandma was neat, meticulous, frugal, thoughtful, fashionable, and full of spunk.  These qualities were evident to anyone who knew her.  Nothing was ever out of place, all of the bases were covered, birthday cards always arrived, jewelry was well polished, (by the way, QVC has lost one of its biggest customers), and she always made it known how she felt.  If a meal wasn’t up to standards, it was “The Pits”.  If you commented on something good, she would respond, “I should say.”  No punches were pulled with Grandma.  And by the way…don’t dare show up late for curfew!

Grandma loved her games.  Countless hours of my childhood were spent playing Crazy 8’s, UNO, Yahtzee, and building card houses with Shirl (Shirley).  I believe that these simple games were reflective of how she approached life.  Life doesn’t need to be complicated.  If we don’t complicate it….It won’t be complicated.  I am not sure who had the upper hand on Crazy 8’s, but I am sure she was keeping score.  She didn’t like to lose……

Along with games, Grandma loved food.  When I was growing up, and true to her German heritage, Grandma’s ham, gravy, and mashed potatoes were the best there was.  Grandma also loved her sweets.  She was famous for her homemade pies.  When dessert was served, she would say “just a sliver.”  We all knew what that meant.  A sliver it was, and then another and another.  Food, Chicago food, was always a connection for us.  I would frequently tell her that it was a good thing I didn’t live in Chicago, or I would weigh 1,000 lbs.   I certainly have Doris to thank for my affinity for Italian Beef and Deep Dish Pizza! 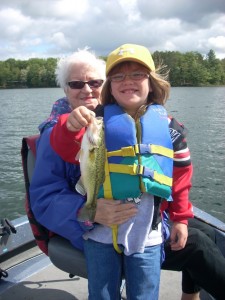 As with all of her great grandchildren, Grandma loved spending time with Morgan.  It was my great fortune to watch the interaction between “Granny” and my daughter over the past nine years.  Their relationship was inspirational.  One of my fondest memories will always be Grandma and Morgan in my boat, fishing Bluegills of course.  As Grandma was reeling in one of the many fish that ended up in her freezer that day, she noticed a larger fish attempting to eat the one at the end of her line as she pulled it out of the water.  I promptly told her that she had just missed an opportunity at a musky.  She then said, “Thank Goodness.”  Grandma had no need for a musky.  She only wanted dinner.  It was a big musky, by the way.

Grandma left quite a legacy.  We should all be so fortunate.  Her daughter Janis is a retired school teacher and devoted mother who raised 4 children.  Those 4 children:  Jeff, Jenny, Jocelyn, and Jason gave her 7 Great Grandchildren:  Morgan, Ella, Jimmy, Eamon, Charlie, Jack, and Lee.  We all carry a piece of her within us.  Jason contains Grandma’s spunk having survived a near fatal car accident to become a well respected Forester in northern Wisconsin.  Jocelyn exhibits Grandma’s thoughtful and frugal side while raising her three energetic and enthusiastic boys as well as being a United States Army veteran.  Jenny, a Doctor in the United States Air Force, is as neat and meticulous as they come.  And then there’s me…..Well, I am a professional fishing guide.  Enough said.  As for her fashionable trait, all you need to do is visit my daughter’s closet!

I had the great fortune of becoming closer to Grandma in recent years.  When my mom and dad would leave town, I was “In Charge”, which meant making sure Grandma took her medications, made her appointments, and was taking care of herself.  She was always gracious and appreciative of any help she was given as well as apologetic for being “too slow”.  Grandma loved to go out for lunch, and she had no problem telling the waitress what she thought of the meal.  Take it from me…if you she told you it was “the pits”….it was the pits….

I vividly remember the day that I helped transport Grandma to the nursing home.  As they strapped her wheelchair into the van, I told her that this was a “First Class Ride”.  Her response… “I should say”…  In her final days, Grandma never complained.  She was comfortable, coherent, and content.  She deserved it.

As evening approached, the disciples came to him and said, “This is a remote place, and it’s already getting late.  Send the crowds away, so they can go to the villages and buy themselves some food” Jesus replied, “They do not need to go away.  You give them something to eat.”  “We have here only five loaves of bread and two fish,” they answered.  “Bring them here to me,” he said.  And he directed the people to sit down on the grass.  Taking the five loaves and the two fish and looking up to heaven, he gave thanks and broke the loaves.  Then he gave them to the disciples, and the disciples gave them to the people.  They all ate and were satisfied, and the disciples picked up twelve basketfuls of broken pieces that were left over.  The number of those who ate was about five thousand men, besides women and children.

Posted in Articles, News and Media