When we arrived at the landing around 6:30 a.m., the thermometer read 10 degrees with a stiff north wind hitting us in the face.  It was COLD! 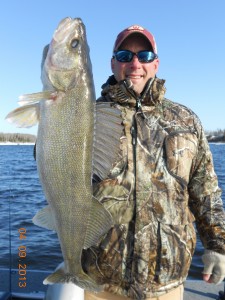 My 2013 fishing season started out with a first.  I have always wanted to fish the early spring walleye run on the Rainy River, but the opportunity never presented itself until this spring.  That was until my old Ashland High School buddy and fishing partner Stephen Frisco invited me to spend a day with him on this renowned fishery for a chance to catch some truly magnificent fish before the season is closed on the river while they spawn.  After juggling some personal commitments were able to coordinate our schedules and put it in the books.

When we arrived at the landing outside of Baudette around 6:30 a.m., the thermometer read 10 degrees with a stiff north wind hitting us in the face.  It was COLD!  In fact, it very well may have been the coldest open water fishing day I have had.  Boats trying to launch in front of us were actually frozen to the bunks of their trailers and were unable to get their boats in the water.  One poor group actually had to borrow a spare plug from us because the rubber on theirs was so frozen that they couldn’t get it in the boat.  After thanking us up and down for the plug, the owner of the frozen rig declared, “Minnesota Nice”.  Well, I guess guys from Wisconsin can be nice to.

It took us a little while to get rolling, but once Stephen located fish we had fairly consistent action throughout the day.  He had a hot tip from a friend who had been on the water the weekend before, and the information proved to be useful.  The river was running slower than usual due to the late thaw, and many fish had yet to enter the river.  3/8 oz. jigs tipped with rainbow chubs dragged in 13 to 14 ft. of water with the wind and against the current was the correct prescription for the day.  A little bit of white for color on the jig seemed to be the difference between getting bit or not.  The action was by no means fast and furious as I know can sometimes be the case during the spring 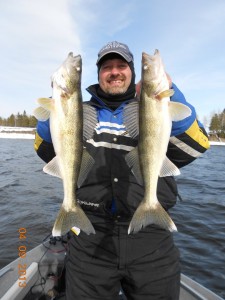 run, but we kept busy throughout the day with many fish in the 17″ range.  The bite was not aggressive, and we missed as many fish as we landed.  Although we didn’t connect with any of the 30″ whoppers that are often caught at this time, we did manage to land a 28.5″ and 26″.  Both fish were fat, healthy, and at peak weights for their lengths.  A steaming hot venison steak sandwich cooked on the grill by Stephen for lunch hit the spot, and we passed the time between fish telling old war stories.  It’s funny how good we used to be!  By the looks and sounds of the anglers nearby, I think we accounted pretty well for ourselves as there wasn’t a lot of activity in other boats.  We did however watch one poor soul fight a sturgeon for quite some time.  After a tremendous battle the sturgeon decided to let the angler go, as is often the case when using walleye gear to tangle with these brutes.  The defeated angler flopped backwards into the bottom of his boat when his line went slack.  I give him credit for trying! 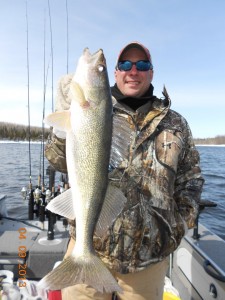 All in all, it was a great trip and a wonderful opportunity to reconnect with my old friend that I hadn’t seen in many years.  He and his wife Robin couldn’t have been more hospitable, and I look forward to more opportunities for us to get in the boat together.  Thanks for the great day on the water Stephen.  You are an excellent guide, a good friend, and a darn good cook!