Wind, rain, snow, cold, and catching fish.  That about sums up the past couple of weeks in northern Wisconsin.  October didn’t waste any time in bringing us some serious fall weather and some dramatic changes in fishing conditions since our last report.  Regardless of the weather, fishing has been excellent on most days with the fall program well under way.  You can’t go wrong right now for whatever you’d like to chase, and you can put some really good fish in the boat if you’re willing to bundle up and get after them.  Our leaves are at peak colors in most areas, and it’s really a fantastic time of year to be on the water.  Here’s where we’ve been fishing, what we’ve been after, and how we’re getting them. 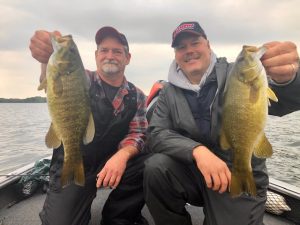 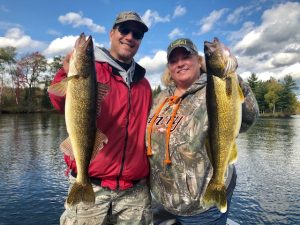 Water temperatures have dropped into the low 50’s on most bodies of water around Hayward, and traditional fall patterns have set up for most species.  Walleyes have migrated to deeper water, and we’re finding them holding close to bottom off mid lake structures in 35′ – 45′ on clear lakes and 20′ – 30′ on stained lakes.  Two approaches are working best depending on the day and lake.  Plain old jig/minnow and slip bobber/minnow combinations are a good way to start.  If fish are schooled up in big groups, anchor up or spot lock on them.  If you’re finding fish spread out, try setting up a controlled drift to cover more water.  If they’re a bit stubborn on live bait, try going after reaction strikes with Jigging Rap style baits or jigging spoons like Kastmasters.  Snap them off bottom and hold on!  Chris and Jolene Severt from Cameron, WI had a fantastic day catching good numbers and big fish that were clobbering our Jigging Raps all day long.  We’d catch a few out of every school and kept moving until we’d mark another bunch.  This is the exact scenario where the Minn Kota Terrova Spot Lock feature pays huge dividends.  Mark them, spot lock, and start catching.  It was one of the only “good” weather days we’ve had lately, and I had a blast watching this fun couple pound some great fish.  We taught them a lesson Severts! 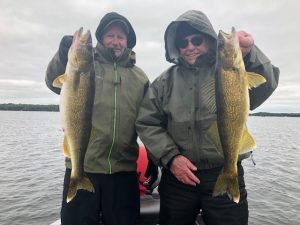 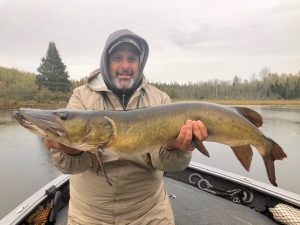 Muskies just can’t help themselves this time of year.  They have to eat…  If you’re in the right place at the right time, you stand a good chance of connecting on a fish.  Flowages/rivers, clear lakes, and stained lakes will all produce, and it pays to concentrate your efforts near food sources that include smaller species like panfish, walleyes, etc.  If you know where these fish are schooled up, work adjacent break lines and structures with anything from bucktails, jerk baits, large rubber baits, and glide baits along with dragging a live sucker on a quick set rig.  Target 15′ – 30′ on clear lakes, 5′ – 15′ on stained water, and just about anywhere on rivers.  The new Bait Rigs Brute bucktail has been a big producer lately for a lot of folks.  The unique willow/Colorado combination blade produces a thump and grind that big skis are having a hard time resisting.  Jason Keesy from Cedar Falls, IA returned to finish off a quest he started last year in search of his first fly rod musky.  Heck, it would also my first guided fly rod musky…  He spent 2 hard days in 2018 grinding, and it was a learning experience for both of us to say the least.  Musky fishing is a lot about determination, and Jason has a ton of it.  He wasn’t going to be denied and connected on a fantastic strike around mid day.  The fish rocketed out of the water, and thankfully I didn’t screw up the net job.  Boy was I nervous!  It was without a doubt one of the coolest things I’ve ever been a part of and a day neither of us will forget.  Congratulations on an incredible fish and accomplishment Jason.  You deserved that one brother! 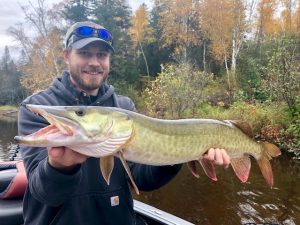 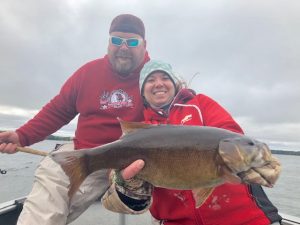 Smallmouth Bass have been on a feeding rage for most of the season, and I don’t know if I remember seeing so many incredibly fat fish.  It seems like every one we catch hast a bursting belly with more fish than normal in the 4 – 5 lb range hitting the net.  Most of them have moved deeper with falling water temperatures, and we’re finding them close to rock structure or wood in 15′ – 25′.  Wind blown shorelines are also a good spot to look if you have the right conditions.  If you catch one there’s definitely more around so don’t be too quick to move until you get a few bites.  Paddle tail swim baits on a Bait Rigs Slo Poke Long Shank jig are an excellent way to search for and locate fish with a live sucker minnow on a lindy rig a great way to hammer on them when you locate a school.  If they get finicky, try spicing up your rig with a Bait Rigs Willow Spoon.  The extra flash and wobble can make a big difference.  John and Nancy Smith along with Patricia Godfrey and Erik Roberts had a little redemption on the fish after their trip last year had to be cut short due to impossible weather conditions.  They arrived to better conditions this year and some hungry smallies that we found on a deep rock pile.  Every drift produced multiple strikes, and we had some fun chaos going on for awhile.  Erik took care of business, and his grandfather John has obviously taught him well.  This fishing family put a pile of fatsos in the boat, and it was a blast netting every one of them.  Nice work gang! 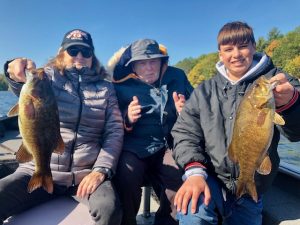 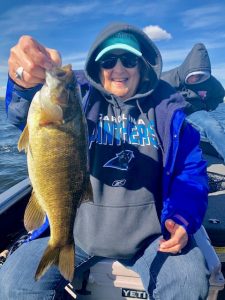 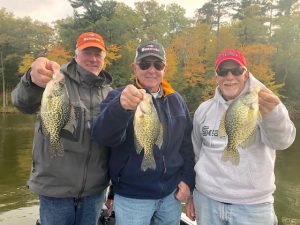 Crappies continue to be found schooled up in basins on most lakes with more fish showing up as water temperatures drop.  Most of our time has been spent on stained water lakes, and we’ve been locating them in anywhere from 25′ – 35′ depending on the day.  Schools have been moving a lot lately, probably due to all of the crazy weather, and you won’t necessarily find them in the same spots from day to day.  If you show up and they’re gone, it’s time to get some screen time in on the Humminbird and start looking.  Ideally you’ll find stacks of fish located near bottom or suspended up a few feet.  When your screen is full of fish, stop and catch.  If you can’t find that scenario, look for fish spread out along the bottom sometimes only marking a few at a time.  You might have to be a bit more patient in this case, but bites should come in waves as fish swim through.  Vertical presentations using Bait Rigs Panfish Cobra jigs tipped with plastics or small ice spoons will catch a bunch of fish on aggressive days.  When the bite is tougher, switch to a slip bobber presentations to give them a longer look and cover a wider area.  Chuck Reynolds from Seaguar along with buddies Chip Stringer and John Richter arrived for their annual fall multi species trip, and we spent a windy afternoon targeting slabs.  The bite was steady, and it didn’t take long for this crew to put a good fry together with fish up to 13″.  All of my reels are spooled up with high visibility flash green Smackdown and it was the absolute key to detecting subtle strikes with the boat bouncing around in rough conditions.  These guys are always a good time in the boat with lots of laughs to go along with the fish we catch.  Of course you have a fish on Chip!  Why wouldn’t you? 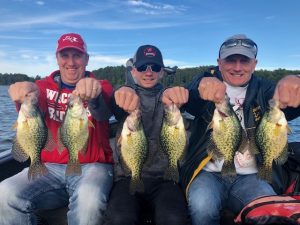 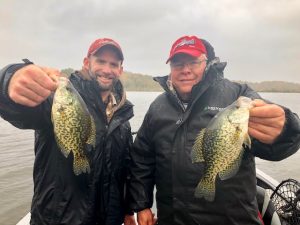 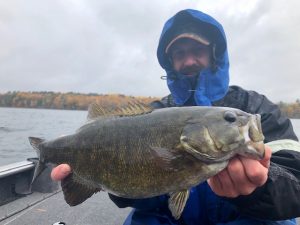 Finally…  We’ve been able to put a couple of good outings together on Chequamegon Bay despite continuously rough seas.  Water temps have plummeted into the high 40’s and the smallmouth bass have gotten the memo that it’s time to eat!  An abundance of baitfish in the bay seemed to make them a bit hard to locate and catch throughout the summer/early fall, but they are definitely beginning to congregate on deep rocks in 15′ – 20′, over mud flats, and along channel edges in 15′ – 25′.  Every one you catch is as fat as can be, and it’s obvious that they’ve been packing on the pounds at the buffet over the past couple of months.  It pays to spend some time looking for clusters of fish on your electronics before wetting your lines.  When you’re confident that you have them cornered, jigging spoons and snap jigging plastics along bottom will get the most active fish in the school to respond with minnows on live bait rigs or suspended under slip bobbers picking off the rest of them.  Feeding windows can come and go throughout the day at this time of year, and don’t get too discouraged if the bite shuts down.  Stick it with them until they light up again or move on to the next school.  The bite should only get better over the next couple of weeks, and I won’t be surprised if some of the largest smallies of the season are caught.  Walleyes and big pike will also start to show up with some really exciting mixed bag opportunities happening by the end of the month.  Nathan Loveless from Chattanooga, TN braved wind, rain, sleet, and snow to catch some beautiful Lake Superior bronzebacks.  After a strange start where we couldn’t get anything right and missed our first several bites, we stuck with it and ended up with a bunch of solid fish that included a 20″ whopper.  It was Nathan’s first trip to Lake Superior, and he definitely got the full experience.  Big lake, big weather, and big fish! 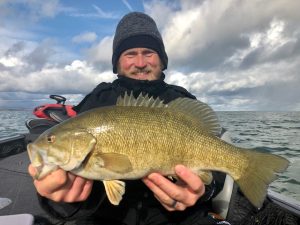 We’ll be wrapping up our guide trips at the end of this month, and there’s only a few weeks left before ice fishing will be getting most of the attention.  Can’t believe I just said that!…  This time of year always goes by so fast, and I’m in favor of trading out a February for an extra October.  Who’s with me?  One more open water report for 2019 is on the way.  Stay tuned, and we’ll keep you posted! 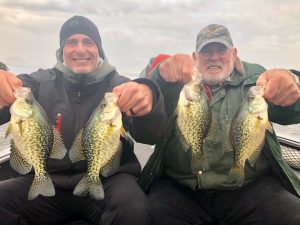